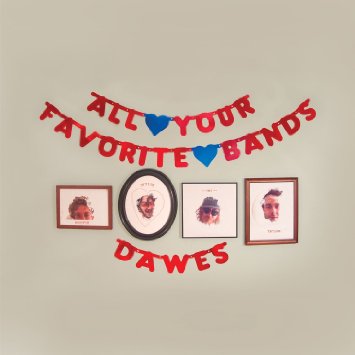 The fourth album from Los Angelas based foll-rock band, Dawes, proves to be a phenomenal addition to their discography. Produced in Nashville by David Rawlings, All Your Favorite Bands features nine new original recordings written by guitarist and vocalist Taylor Goldsmith, with the exception of the title track, which was co-written by Jonny Fritz.

One of the aspects of I have always admired from this band is the beautiful simplicity in all of their songs. Nothing is overcomplicated. There is just the right amount of instruments, doing the right amount of playing, complimenting each other perfectly. This is all layered underneath gorgeous vocals and harmonies, with lyrics that aren’t convoluted or confusing. This is absolutely true in All Your Favorite Bands.

The single “Things Happen” is the first track on this album and is an amazing start. Following the theme of simplicity, the song is about how shit happens. It starts off rocking and then immediately drops during the verse in dynamic; a simple kick and snare beat, a sliding bass, sporadic notes. Eventually, some tasteful piano is added and it builds up to the chorus. “Let’s make a list of all the things the world has put you through/Let’s raise a glass to all the people you’re not speaking to/I don’t know what else you wanted me to say to you/Thing’s happen, that’s all they ever do.” Beautifully simplistic. The vocal round at the end of the last chorus is also a major standout on this track.

Another highlight on this album is “Don’t Send Me Away.” The opening is an interesting drumbeat for a two measures and then the rest of the instruments drop in. Intense guitar, precise bass, and then Taylor Goldsmiths angelic voice. The song features one lover talking to another, pleading to not be sent away. “But don’t send me away/This is where I’m supposed to be/Don’t send me away/You don’t what you do to me/Don’t send me away (x3).” It’s a heart wrenching song, as we can all sympathize with heartbreak and being sent away by someone we truly love.

The title track is also a major standout. Stunning vocals, lyrics, and harmonies, layered over piano and minimalistic guitar and bass. Eventually the song builds and a drumbeat and organ come in. The songs seems to be about not changing who you are, someone that you used to know continuing to be that person you imagine them being in your head. “When I think of you, you still got on that hat that says let’s party/I hope that thing is never thrown away.”

The closing song, “Now That It’s Too Late, Maria” is a slow, bluesy song that highlights the bands musicianship and instrumental ability. It’s incredibly clean and flows wonderfully. It also highlights Taylor Goldsmith as a guitarist by featuring incredible licks here and there. It’s also a nine minute, 46 second song, which is perfect because by this point in the album you really don’t want it to end.

All in all, this fourth album contains new, exciting songs and shows maturity in a band, and also has the core elements of Dawes all fans have come to know and love. This is definitely a must listen to album and comes right in time for some summer grooving.