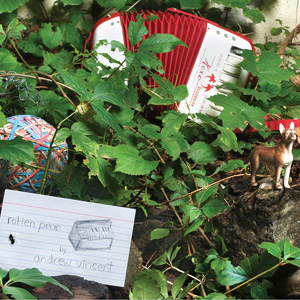 As a reviewer it’s all too easy to dismiss solo acoustic artists as ‘just another one of those singer/songwriter fellows’ and upon first listening to Rotten Pear I fell straight into that trap. Who is Andrew Vincent, what’s he on about and if I’m honest why should I even care, why would anybody care? After all, he’s just another man singing about the same old stuff – “I don’t want nobody else/No, I want you” for example. Not yet ready to tackle the banality of another singer/songwriter I switched off the record player and switched on the ever-so-slightly less mind-numbingly inane Hollyoaks omnibus.

I was wrong to do that, so unbelievably wrong. On my second attempt I was soon hooked on the pop melodies and chugging power chords of ‘Nobody Else’ and I was mesmerized by his other-worldly cover of Kate Bush’s ‘Hounds of Love’. Futureheads, eat your heart out. By the third listen I was eating out of the palm of Mr Vincent’s hand, and by the fourth and fifth listens… well let’s just say I was like putty in his hands. At times being gently shaped and moulded by the sugary-sweet vocals of songs like ‘Diane’ and ‘Sleep to Dream’ and at other points being knocked back with all the chord chugging power of Billy Bragg in tracks like ‘Under Your Thumb’ and ‘Canadian Dream’.

The quirks of Vincent’s observations coupled with his sparkling turn-of-phrase make everything he has to say worthwhile and memorable. The lyrics always have room to breathe, with the music rarely imposing itself too much. The unlikely combination of atmospheric synth and brash power-chords surprisingly work well, and that is for one reason only. It’s because of the room Vincent leaves in his music; allowing each component to shine individually, and only when it’s required.

With hints to punk and protest pop Andrew Vincent has succeeded in creating the kind of singer/songwriter album that can grow on you without grating. Everything in the album is perfectly positioned, there is not one effect or idea out of place. As for that Kate Bush cover… well that is simply a masterpiece.