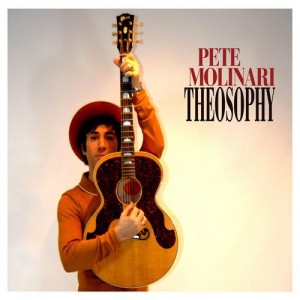 Regarded by many as one of the UK’s finest folk singers, Pete Molinari has struck gold again with his latest opus, Theosophy, a collection of tracks which are tinged in the sound of the early 1960’s. It is rock ‘n’ roll in its purest sense, distilled and crafted into the 13 songs found here, and is an auditory delight throughout its entirety.

This is folk music, then, but not in the traditional sense of the word. Lyrically, Molinari sings tales of desire and loss and religion, which do have foundations in the traditional folk scene, yet musically, the theme of Theosophy is rooted deep down in the early origins of rock ‘n’ roll. ‘Evangeline’ and ‘I Got Mine’ would not be out of place on the Beatles’ Please, Please Me LP, and not just because of how both songs sound timeless-Molinari sounds eerily like a young John Lennon-yet this is something which never borders on pastiche.

Given the curious nature of the album title (Theosophy, according to Molinari, is the link between science, mysticism, religion and the arts), one would expect the contents to be of an equally offbeat nature. Thankfully, this isn’t the case. Molinari is obviously aware of his strengths and thus has recorded an album which sounds as if it was recorded in the 1960’s and found some fifty years later before being released. Tracks like ‘What I am, I am’ are bound to evoke memories of Neil Young’s After the Gold Rush, and comparisons to Young are not without merit. It isn’t all a look into the past, however. A duet with Dan Auerbach, ‘So Long Gone’, wouldn’t sound out of place on a Black Keys album, and is a welcome addition to Molinari’s canon. What Molinari does is combine the very best of his personal influences to form his own unique take on them, and does so to great success.

Theosophy is just the latest in a line of extraordinary achievements for a man focussed on becoming the very best in his field.