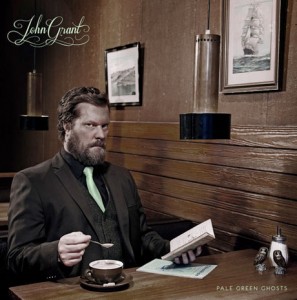 Last year, in front of an audience of people on the south bank of the river Thames, John Grant came out for the second time in his life. The first time he came out it had been as homosexual – a personal realisation, the consequences of which had informed much of the lyrics upon his remarkable debut album Queen of Denmark.

This time John Grant was announcing to the world the he was HIV positive – less a personal realisation then one handed to him by a former partner. The decision to share this information so publicly is one that followers of Grant might understand – his openness regarding controversial topics (suicidal thoughts, religious homophobia – and that was just one song) was one of the main draws of Queen of Denmark. Grant is a man unafraid to deal openly with very personal issues, and in doing so his work often opens up these issues for wider discussion.

In the midst of this health crisis Grant recorded his new album, Pale Green Ghosts, which he describes as an attempt ‘to take the bull by the horns, and to live’. The title track is seemingly an ode to pushing on, and opens the album. It’s an instant statement for the record, thematically, lyrically and above all, musically. Anyone who remembers the sumptuous 70s FM radio feel of his debut may be surprised by the 80s electronica that runs thick and heavy through the new record.

Somehow though, this change works. The darkness of the music, the big bursts of synth and sound – if rumours of Adele being signed for her second Bond theme are true, then producers have missed a trick not bringing in John Grant to inject some clinical electronics and contrarily heartfelt soul into the track.

It’s a strange feeling at first, especially when to many Queen of Denmark has become a familiar weekly or even daily listening experience – but give it a few listens and Pale Green Ghosts’ electronica becomes as vital a part of the album as anything else. At times it recalls The Knife, at others, Gary Numan. Once or twice there are flashes of Kraftwerk lighting up the background of the songs. What’s perhaps more remarkable than anything else is that in so many ways Pale Green Ghosts remains a folk album – a record on which Grant’s storytelling is the most important element.

To this end, Grant’s voice as a songwriter is still two parts tragedy and one part brilliant, shining wit. On ‘GMF’ he sings “Half of the time I think I’m in some movie/I play the underdog of course/I wonder who they’ll get to play me/Maybe they’ll dig up Richard Burton’s corpse”. Hard as it may be to believe, this might not even make a list of the top ten funniest lines in an album that is as as outrageously funny as it is thought-provoking and moving. Hell, it isn’t even the funniest line in that song.

There are too many highlights on Pale Green Ghosts to gather together in one review – the impossibly satisfying saxophone on ‘Ernest Borgnine’, the grand singalong charm of ‘I Hate This Town’, which feels like a musical number from an alternate-universe Muppets movie. The latter of those songs segues seamlessly into album closer ‘Glacier’ – an archetypal John Grant song, in which confessional lyrics and harsh realisations are paired with casual swearing and music so genuinely sad that to call it ’emotive’ would seem callous – on par with calling it ‘manufactured’ or ‘cynical’. No – music has rarely captured human emotion as wholly and authentically as it is on ‘Glacier’.

There’s been a three year gap between John Grant’s debut record, Queen of Denmark, and 2013’s follow-up. Pale Green Ghosts is no Queen of Denmark, though this is entirely in the same way that “Heroes” was no Hunky Dory. That is to say that Grant’s approaches to his two records have been so different, so totally, unashamedly separate from one another that the only thing that connects them, bar Grant’s starkly honest lyrics, is their absolute and undeniable quality.