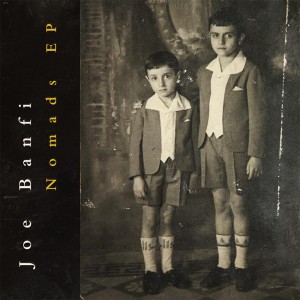 Where Joe Banfi’s last EP Iron felt like a conscious effort to show off the Northwich man’s full range in four short songs, there is no such pressure affecting the follow-up Nomads. Instead, Communion’s next big thing seems to be focused squarely on what might be his best song yet, the title track.

With a deep and powerful rhythms undercutting a much more simple tune, ‘Nomads’ creates the feeling of something ancient and mystical. If the idea of the Hold Steady recording a song for the Game of Thrones soundtrack remains hard to imagine, hearing something like this during a knees up at the Lannister’s place should be a little more plausible.

As ever, Banfi lays the effects on pretty thick but succeeds in creating the atmosphere he seeks, rather than a sense of style over substance. But the rest of this EP disappoints a little in terms of giving us some more clues as to the album. The much more introspecitve ‘Family’ doesn’t show us much new, and it slows the pace right down to a point from which it barely picks up again during the rest of the record.

Even fewer clues are offered by the inclusion of ‘Olive Green’, which already featured on Communion’s New Faces compilation early last year. Just when you’re thinking it could use a change of pace it arrives midway through ‘Oarsman’ as Banfi’s old grunge influence raises its head once more and the guitars rage, but this does not feel up to his previous standards. ‘Nomads’ is outstanding, but as we get nearer and nearer the debut album, only the title track and the previously heard ‘Olive Green’ are the only clear finalists for inclusion here.