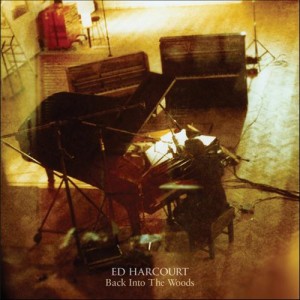 Written in one month and recorded in six hours; Ed Harcourt’s PR company would have you believe that the best angle on his latest album, Back Into the Woods is the story of its creation. They’d be totally wrong though. The best angle is the story of a man who, over the course of twelve years and six studio albums has time and again proved himself Britain’s most wasted natural resource.

Now it’s fair to say that Ed Harcourt will never fill the nation’s stomachs, or provide electricity for, say, the people of North Yorkshire. But in terms of sources of pure songwriting ability, there have been few strains in the new century so rich as Harcourt’s. When, in 2001, Harcourt released his debut and received a Mercury nomination for his effort, it should have been the start of an incredible ascent into the nation’s hearts. But then, the same could be said of the release of his second album, or even his third – arguably the best pop record by a solo British male since (and these are words rarely spoken on FFS) Robbie Williams’ I’ve Been Expecting You.

But he never made that leap from critic’s darling to national treasure like, say, Elbow, Adele, or Clare Balding. There’s always been a sense that this is partly down to an inconsistency on Harcourt’s part. When, a few weeks back, FFS decided to listen to every Ed Harcourt album again, in order, there was no dud record, false starts or even poor individual tracks. Rather, we categorised his work (to ourselves, in a very internal sort of a way) not so much as a ‘hit and miss’ career as a career of ‘hits and not-quite-hits’.

As a result, the album feels terribly nostalgic – combine intelligent and good old-fashioned song-writing ability with a simple but powerful piano and the result feels like a collection of old standards performed for a discerning modern audience. ‘The Pretty Girls’, one of the album’s absolute stand-out moments features an overwhelmingly lonesome melody that could bring a tired man to a reluctant sob.

Those pleasant if forgettable songs – ‘Murmer in my Heart’, ‘Brothers and Sisters’ – that fit among the stronger pieces are lifted time and again by the glimmers of great songwriting talent around them. It feels very often as if Harcourt could, if he wanted, be one of the foremost songwriting talents this nation has ever produced – the sort of person who looks up only to Lennon, McCartney, Bowie and Taupin. But it feels also as though Harcourt doesn’t really want this, that’s he’s happy just to be writing at all. And at this point, why wouldn’t he be? Over a decade into his career, and Ed Harcourt has written at least seven songs worthy of being bought by the National Trust and preserved like stately homes. And despite his abilities, he remains an unknown to almost the entire nation. He may well be pushing himself endlessly to create the best music he can, but if he isn’t, it would be hard to blame him.

‘The Cusp & The Wane’, the new album’s opening track, is a sumptuous piano piece underlying a classic ode to the underdog. In many ways, it could be Harcourt’s own anthem, celebrating those not appreciated in their time. ‘Mozart died a pauper, but he didn’t go in vain/Take solace in his knowledge of the cusp and the wane’ he sings, as the warm piano plays softly beneath him. Perhaps Harcourt has indeed resigned himself to never being fully appreciated – ‘One more cheer for the underdogs, who never played the game’. This is his statement, then. His single moment revealing to the world a musician who will never receive the recognition he deserves. It’s an absolute moment, recorded during that six hour session. It’s starkly beautiful, and harrowingly honest. And, frustratingly but entirely fittingly, most people will never have a chance to hear it.