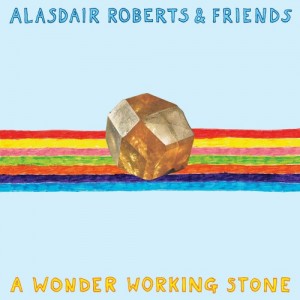 A Wonder Working Stone is, depending on how you count it, the eighth album by Alasdair Roberts, the rake-like Scottish folk bard-bellower with the cello-bow voice. It’s not, by any means, an easy voice. But it is a rich one, full of resonances and hollows, heights and depths; a voice so jagged and immovable you can imagine stalagmites growing from its ceiling. It’s a voice that has, over the years, given rise to an interesting and eclectic range of records and side projects from self-penned odes to traditional renditions to (I kid you not) musical puppet shows.

A Wonder Working Stone is Roberts’s most audacious, passionate and endearing offering yet. Its themes are far-ranging. From anti-ecclesiastical satire to Christ-like narrators; all sorts of evocations of nature, the turn of the seasons, and the turn of the world, the songs’ sphere of reference seems all-encompassing. But if this album is about one thing, it is about Scotland, a Scotland wrapped in myths and mist.

Opening number ‘The Merry Wake’ plays with all kind of national spectres, from dances to drinks to “memorable Ossian” (an ancient Scottish poet fraudulently invented in the 1700s), rubbing fact up against fiction, life up against death. It’s the divided history of a nation that doesn’t know whether it’s alive or dead, coming or going, “a confusion of tongues”.

It’s complex stuff and it rewards repeated listens. (You may want to listen to nothing else for weeks.) But for all its cleverness and pedigree, not a single archaism or reference feels gratuitous or pretentious. It’s always touching, always human. Again and again, Roberts’s narrators seem to find themselves in the role of the traditional Scottish poet, voices that stand closer to nature in order to reflect on society from its edges.

Even when country music influences invade the arrangement later in the album, recalling Greatest Palace Music-era Bonnie Prince Billy, the landscape is still all hills and valleys, still on the periphery, “on the edge of empire”, praising “my Caledonia” and its “heather, mountain, loch and sea.” And there’s more than a scattering of Scots throughout.

If this all sounds a bit political to you, that’s because it is. But not straightforwardly so. It’s something more than politics – a new kind of Scottish song for what could be, one day, a new kind of Scottish nation. Through Alasdair Roberts’s voice both of these things sound dangerous and enticing as never before. And, indeed, as old as the hills.

← Interview | Josephine on new album ‘Portraits’ and appearing on Jools Holland….
Album | Foxygen – We Are the 21st Century Ambassadors of Peace & Magic →