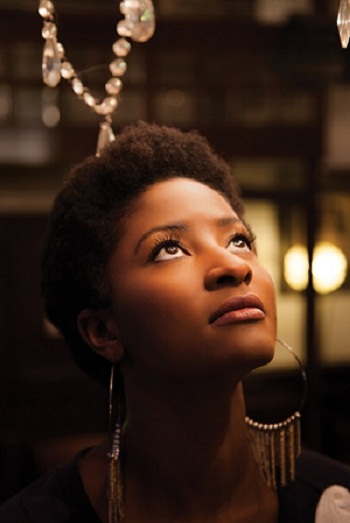 Mancunian singer-songwriter Josephine recently released her second album Portrait to great acclaim. Her music is a combination of soul and folk, with a healthy dose of pop which was recently showcased on ‘Later with Jools Holland’.

We caught up with her to chat about that successful TV appearance and the process of making her new album.

Congratulations on the success of your second album Portrait. For those who haven’t heard it, how would you describe the sound?

Can you talk through the process of making this new album?

The process has been really lengthy but most of the lyrics I wrote in bits and pieces over the last 10 years. I started working with my producer Leo Abrahams about four years ago and I played him lots of things I’d written. Some were finished ideas some weren’t; some were just verse and chorus. Eventually we teased it all out and slotted it all together. Same with some of the other collaborations on the album, the ones with Ed Harcourt for example. Ed and I got together and did some writing a while ago and these demos I also took to Leo and we formed the bookends of the album.

It’s been ten years since the release of your debut album A Smaller Version of the Real Thing. How do you feel your music has progressed since then?
Well I was 19 then and I wasn’t really formulating anything. Some things were barely even songs, just ideas that were three or four minutes long. But now I tend to structure ideas a lot more.

You have become ‘mononymous’. Why did you decide to drop your surname from the album cover? Was it purely a stylistic decision?

What music inspired you to become a musician yourself?

Guy Garvey of Elbow, described you as an old soul in a young body – would you agree with that statement?

I’m not really that young any more! But I think at one point it was true.

Hailing from Manchester, do you find the city inspires your music? Do you feel a sense of a music scene?

Yes, Manchester has always had a great scene. Not so much for inspiration but for learning a craft … how to be a musician.

We love your cover of ‘Shipbuilding’ by Elvis Costello. What other covers do you like to perform?

My favourites are ‘The Sailor Song’ by Regina Spektor and ‘Don’t you feel like Cryin’’ by Solomon Burke.

You performed a fantastic set on Jools Holland recently. How was that for you?

Amazing, very nice to be invited indeed. I feel like a professional!

Shows like Jools Holland are great because they allow an eclectic range of artists to share a stage. Are there any contemporary artists/musicians you would like to collaborate with, or just recommend to for folks sake?

I’m sure you’ve already heard of them but HAIM,HAIM, HAIM !!

Lastly, when can we see you on tour? Any dates lined up?
I’m on tour with Paloma Faith throughout Jan/Feb. I’m playing my own headline show at Bush Hall in London on 6th Feb and I’m currently booking more headline shows for April.  All can be found on the  website.