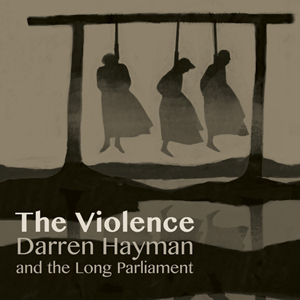 Do you sing about yanking on the ankles of the hanging and half dead in the shower much? No, nor do we. Or at least we didn’t until really quite recently; listening to The Violence a few times will have that effect on you.

Through a grimly impressive act of juxtaposition, Darren Hayman has succeeded in bringing to life the Essex Witch Trials of the 17th Century in such a way that they seem (and sound) like they could be happening round the corner from our suburban semi as we listen.

Heavy on instrumental interludes, shed blood and cracked bones, this concept album sparks intense curiosity in the listener, who is impelled towards the internet in search of more information on the likes of Vinegar Tom and Elizabeth Clarke, both of which have songs devoted to their particular stories.

The song for Elizabeth opens with the tense creak of a rope under strain swinging to and fro, starkly evoking the moment of execution. An unmarried, one-legged woman in her eighties who was first to be accused and executed in the Trials, Hayman imagines her thoughts pre-execution: “Who’s going to feed my dog? Who’s going to pray the rain away? Who’s going to pull on my ankles when I’m swinging?”

The Violence shifts between the beautiful and the visceral; humanity at its worst is fearful, swift to judge and slow to speak up against misused authority, at its best it displays incomprehensible strength and optimism in the face of intense suffering.

A number of instrumental tracks offer respite from the visceral descriptions of torn flesh and cracked bones, as well as opening a window on songs and ballads from the civil war era. ‘The She Cavaliers’ blends guitar and harp in a gentle harmony which permits the mind to wander, if only briefly, from the ducking stools and gibbets, whilst ‘When the King Enjoys His Own Again’ offers a modern interpretation of a piece of music first performed in the 1600s.

If all history lessons were as compelling and absorbing as this, we suspect GCSE History standards would rocket.