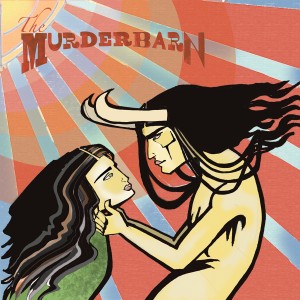 After a year holed up in the mysterious self-constructed studio from which they take their name, The Murder Barn emerge blinking into the light. The band cite Nick Cave and the Bad Seeds and Ennio Morricone among their list of influences, which when combined with a female lead vocal courtesy of Chesca Dolecka calls to mind the under-rated Hot Puppies.

There is a darkness unsurprising given the band’s name, particularly on ‘Wall Up The Family’ (“I’m like a psychopath/ There’s a good chance my love/ We could find happiness/ If we wall up the family”), but there is a lot going on in the space of four tracks, from the doleful ‘Death Is Still Defeat’ to the title track’s soaring chorus.

With artwork and films also produced in the Barn by Chesca and her sister Becca Grover Jones, a handful of singles already having seen the light of day and an album’s worth of material apparently under their belts, the sextet – also featuring keyboardist Matt Jones, whose indie-rock credentials include Minuteman and Beady Eye – have something of a cottage industry going and are an intriguing underground talent to watch.