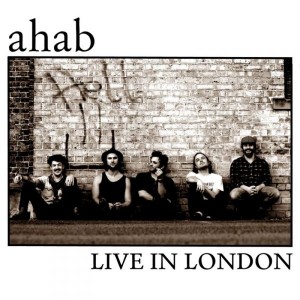 While I’m sure it’s not impossible to write a review of ahab’s debut album without debating the merits of opting to put it out as a live record, I can only imagine it would sit there the proverbial elephant in the room. Rather than head to the studio to record their first full-length release, ahab headed for The Half Moon in London, and invited a roudy audience along. The goal, they said, was the try to capture their high-energy live shows on record.

And to an extent, Live at London does that. ahab have plenty of strong material, and the likes of ‘Wagon Wheel’ and ‘Lightnin’ Bug’ shine. But there is a nagging sense throughout this record that these are not, or should not be, the definitive recordings of these songs. A sense that they could not have been put down better in a studio. Plenty of them have already appeared on EPs, but that in itself is not enough. And that’s a real shame because ahab show here, amid the crowd noise and the heckling, that they have plenty of strong material.

More than that, the whole feel of the album is somehow wrong for a debut. “Would you like to hear a new song?” they bellow at the audience. “Are you drunk enough to hear a new song?” A sentiment right for the moment, but not for a lasting record. It might make you want to go and see them live if you haven’t already, but it will only leave you wishing they’d stump up for some studio time and record this album properly.

← Interview | Introducing… Patch & The Giant
EP | Oh Stockholm! – All This Will Go →