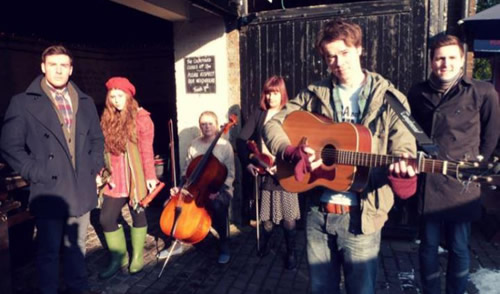 Patch & The Giant are an alternative folk band whose defining characteristics include rough-edged folk melodies, strings, brass, keys and buttons along with boots, braces and cauldrons of tea. Having seen them a few times now, these lovely people never fail to impress me with their energy, not to mention their ability to get the whole room on their feet and dancing, an admittedly rare phenomena to come across these days. Team FFS asked PATG to come and tell us a little bit about their music and what they’ve been up to recently…

Hello For Folk’s Sake. We’re Patch & The Giant – we are two Scots, one Ulsterman, a Jerseyman, a Southerner, a Somerset shantyman and a Kentish Maid…all now residing in London and otherwise known as Sara, Gabe, Chris, Ed, Liam, Luke and Angie. We’ve been playing together in varying formations for just over a year and our music is many different things…we’ve always purposely avoided drawing comparisons so we’re not going to say who or what we sound like, only that our style reflects a love of the sea, storytelling collective heritage and our newly coined term ‘horngasm’. Our cache of instruments currently includes guitar, bass, assorted drums and percussion, ukulele, fiddle, cello, banjo, mandolin, accordion, trumpet, flugelhorn, melodica… and more.

Tell us a bit about your last/latest single?

Shamefully, we’re yet to actually release one. We have just recorded a song for the very soon to be released Folkroom Anthology Two though, A Local Man. This song actually sums us up pretty well and it’s one of our oldest songs. Written about a famous shantyman from Watchet in Somerset, where Luke grew up, it pre-dates half our members but it’s grown as the band has grown and each of us has put our own stamp on it. It’s great that Folkroom Records asked us to be on this record as it features a lot of our friends and people we’ve played with.

A few days ago as it happens. We got together with Folkroom Records to host a boat-gig on board Tamesis Dock in London and asked Keston Cobblers’ Club, Freddie & the Hoares and Worry Dolls to support us. It was just invigorating, the boat was absolutely full and the complement of acts was amazing. They were all bands we’ve played with before and whom we hope we can call old friends…though they may not say the same about us!  It’s really nice to have that familial feeling when playing gigs and the audience were just so responsive and having tremendous fun. We were also quite happy that we sold it out after having played several gigs to empty floors or at best a man and his dogs during our earliest days.

Having to traipse around everywhere with seven hundred and twelve instruments and no roadie. We travelled approximately five hundred miles in the space of 30 hours one weekend over the summer – we couldn’t afford anything bigger or to stay overnight so we hired a small people carrier, hit the open road then played four shows with crooked limbs, numb bums and no sleep. We were all still talking by the end though, which was nice.

I think witnessing first hand an audience’s involvement and investment in our music is hugely inspiring. Whether that be laughing, crying, dancing, singing. Whatever. Just getting that response from somebody is a pretty special thing. Just having someone say ‘yeah, that song was great’. It inspires us to carry on doing what we’re doing. Knowing that we’re doing it right. Putting music out there for others to judge and critique can leave us in a massively vulnerable state. So it’s nice when you see people getting it and understanding it. Maybe that makes us sound hugely insecure and in need of constant reassurance but hey, these songs are our babies! It’s also really inspiring to go through that process of building something from start to finish. We’re all really close friends and to go from having a rough version of a song with just guitar to full band, then a whole boat of people singing along…it’s pretty cool to be standing there and sharing that feeling with your best mates at your side.

Buy a van. No, a boat!  Maybe a Hammond organ and finally get an accordion mic system which works (that’s the second worst thing about being a musician…being at the mercy of faulty equipment). ROADIES (Liam).

I think for me personally (Luke) it would ‘The Heretic and The Albatross’. It’s a fictionalised tale of a satanic sailor in 17th Century London. It’s big, brash, loud and we all get to shout on it. Which is quite cathartic.

(Angie) I was going to say exactly the same…good that we’re on the same page. I like it for the same reasons as Luke and because it does actually have a lot of layers in the song…we get to explore lots of different textures and melodies and the energy build and builds and builds before we get to a great climax at the end. We love a good climax.

(Liam) I really like one of our new songs ‘Gone’, it gets stuck in my head quite a bit, but that’s mainly because I am really chuffed with my little banjo lick at the end. Also the more Luke writes, the more I find myself really liking the new songs; it’s a credit to his evolving song-writing skills.

We’ve just started to progress plans properly for our first EP. This is exciting because we’ve been holding off so far for various reasons and we’re now finally getting there. We’re looking to release in early 2013.

We’ve also got a regular event we host and plan to keep growing. It’s at The Boogaloo in north London where we’ve had a residency since January 2012 and it’s called The Sunday Fete, on the last Sunday of each month. It’s picked up a wonderful and loyal following and we’ve met some truly great musicians and built some really great relationships through doing this…particularly at the moment with Folkroom Records and Before The Gold Rush with whom we’re in the midst of planning a big fat Christmas extravaganza at The Gallery Café in London (16th December – diary date)…we’ll be hosting at least fifteen acts across the day and using two stages.

And an Oxjam plug!! On 28th October we hosted our usual Sunday Fete but this time as part of Oxjam Music Festival. A few weeks ago we invaded an Oxfam shop in Camden and made a video (with the help of several friends and guest performers) as a little preview for the day…. (see below)

We become more and more incestuous the more we meet other musicians and there are several who a few of us also play with so naturally we’d want to recommend them… Gabe plays with a wonderful Scottish trio – The Moon, The Son & The Daughters as well as Dirty Duncan & The Herrings, Ed also plays with a cracking group of boys called Frankie The Gambler and Angie’s been playing with Inti Rowland and with Dave Gerard recently. All are absolutely worth checking out.