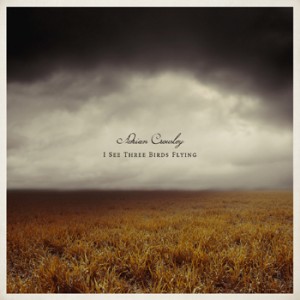 It’s hard to tell whether being called the “best songwriter no-one’s ever heard of” is a compliment or a barb. Adrian Crowley knows just how it feels to wrestle with that conundrum but, when the description is delivered by none other than Ryan Adams, it seems pretty easy to take it as a heartfelt pat on the back.

As if to prove Adams right, I See Three Birds Flying – Crowley’s sixth album – is pretty much my first taste of the Irishman’s music.

The tone is best described as tasteful – a word often used as the thinnest of praise but here reflecting a sober, hushed style.

Crowley’s voice and words are front and centre throughout, his heavy delivery reminiscent of Bill Callahan – though shorn of the pitch-black humour.

If there is a drawback, it is that by the time you reach the back end of this 11-song offering, there is an irresistible temptation to disengage. The musical backings are not without merit but, despite the presence of the occasional instrumental flourish, there is a tangible lack of light and shade.

The opening trio of songs are probably the strongest – ‘Alice Among the Pines’ recalling Tom Waits at his most whimsical, ‘The Saddest Song’ making best use of Crowley’s rich vocals and ‘At the Startlight Hotel’ naggingly melodic.

Whether the quality dips thereafter or the familiarity simply overtakes is hard to discern.