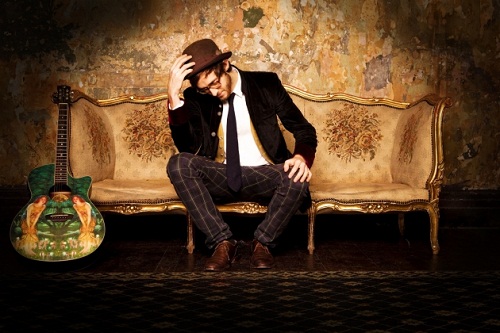 Almost half a million view on YouTube; recommended by Radio 2’s Graham Norton and Absolute Radio’s Dave Gorman and playing gigs with the likes of The Kooks and Johnny Flynn -The Robbie Boyd Band are certainly compiling a glittering CV. With new E.P. Spring Generation out soon, we spoke to Robbie about his heroes, his Olympic experience and flying to the moon.

We play feel-good ‘funky folk’ music and we like to get people dancing and singing along at our gigs! Festival highlights include Bestival, Wilderness and Harvest at Jimmy’s. We’ve already toured Italy, France and Germany and are going to Argentina in November. We’ve had lots of national and international radio play.

Tell us a bit about your new E.P. Spring Generation.

It’s our second EP now so it’s exciting to have lots of stuff on iTunes, Spotify etc and to be available for the world to purchase. Our first four singles have already had lots of play on the likes of Radio 2 and people are responding really well to our music, which is really great. This EP is a continuation of our sound, maybe a bit more celebratory and sing-along-able! I’m enormously proud of it.

You’ve played some very high-profile gigs already, including a support slot for The Kooks and a headline show at London’s Borderline. Which gig stands out as the best so far?

Definitely playing on the Main Stage of Harvest at Jimmy’s to loads of people before The Kooks was the most memorable, on my birthday, having just got off the plane from playing in Italy. It was an amazing experience. I played at Get Loaded in the Park before one of my heroes, Johnny Flynn, which was pretty special. We’ve also played at the Shepherd’s Bush Empire which was awesome and all of our recent London gigs have been sell outs, so it’s fantastic that people are liking what we’re doing and just makes us want to play more and more.

Which artists inspired you to pick up a guitar and make some music?

From an early age people like Neil Young, James Taylor and The Who inspired me to write songs and perform live. Other artists who have inspired include Noah and the Whale, Fleetwood Mac, Simon and Garfunkel,  Bon Iver, The Beatles, Mumford & Sons, Bob Dylan, Cat Stevens, Coldplay, The Smiths, John Mayer, Nick Drake, Arcade Fire and so on.

What is the best and worst thing about being a musician?

The best things are performing on stage with the band, hearing and seeing people in the crowd singing back my lyrics, playing the really big gigs like Bestival, going on tour abroad and hearing my songs on the radio. The worst thing is probably the post gig blues; it’s such a rush being on stage!

If you won a billion pounds what would be the first thing you did with your winnings?

Make an album, and tour it worldwide. Buy my family whatever they wanted. Fly to the moon. Set up foundations for children and young adults in places like Nicaragua and Rwanda. Save the rest to send my children to school!

Which musician, past or present, would you like to make music with?

What was it like playing in the Olympic Park this summer?

Really amazing. I got invited in to play one of my songs on the Chris Evans Breakfast Show on BBC Radio 2. We played on an incredible stage that looked like a huge shark’s mouth that was purpose built for the Olympics. We were also very privileged to be invited into the Athlete’s Village to play for the athletes, which was such an honour, they are all so inspirational. Playing to loads of people at Victoria Park and Hyde Park was also a highlight.

I am loving King Charles at the moment. Daughter and Benjamin Francis Leftwich are also really fantastic.