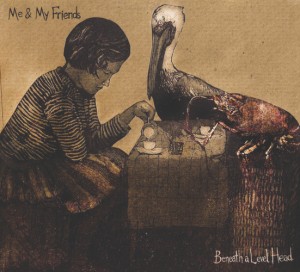 You might not have heard of Me and My Friends before. In fact, if you’re not a regular around the Leeds music scene or a devotee of FFS’s New Bands Panel, you probably won’t have. After one listen to their debut album, ‘Beneath a Level Head’, you’ll wonder why not. It’s good. It’s really good. In fact there are so many good things, it’s difficult to know where to start.

Everything about this hugely accomplished debut radiates quality. Everything from the subtle absorption of styles to the simple fact that a new band had the confidence to put out an unconventional eight-track recording tells you these guys know they’re doing.

The quality is all the more striking given the range. We’re not talking hip-hop to death metal, but there’s an impressive sweep of influences that makes for a richly textured and constantly surprising album. Sam Murray’s clarinet, perhaps the band’s signature sound, lends an inevitable jazzy feel which is pressed home by skittish drums and tricksy guitar solos in opener ‘A Penguin Samba’. There are languid reggae inflections here, Graceland-style Afrobeat influences there, slapped guitars to the left of me, cello to my right… and all pulled in together as a coherent whole.

That’s not to say Me and My Friends are afraid to play it simple. ‘Penseur’ needs little more than precisely-picked guitar and two-part harmonies for large parts of its eight minutes, none of which is wasted. It’s hard not to think of Fleet Foxes. And that continues with the a cappella campfire singalong (they don’t do things by halves – there is an actual campfire crackling away in the background) ‘Greenback Dollar’, with frontman Nick Rasle’s vocals flitting high above those of cellist Emma Coleman for a beguiling blend.

As impressive as the breadth of their sound is their control of it. Only two of the songs are under five minutes, half are over six, but every track is exactly as long as it needs to be. So often length can be self-indulgent, but here it feels generous. Indeed, there is a warmth and generosity running through ‘Beneath a Level Head’ which makes Me and My Friends a band who quietly demand you get to know them.

← Interview | Anais Mitchell talks proper folk, Hadestown, and thinking like a man
EP | Cara Mitchell – Have You Ever Wondered →