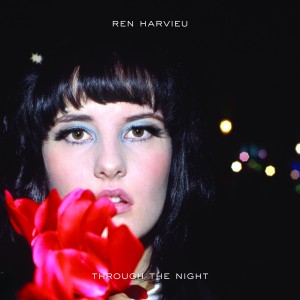 Ren Harvieu’s debut LP, Through The Night, lays its cards on the table almost straight away as you press play: it’s a album about romance and it’s not going to be a subtle ride. The melodrama factor is cranked up to its maximum power. There are sweeping strings and nostalgic pop hooks all over the shop and at times feels like it could soundtrack a gigantically cheesy romantic epic starring Zac Efron. It’s the kind of record that would get a heavy amount of airplay on Radio 2 but that shouldn’t put you off giving this a spin.

Assisted by the likes of Dave McCabe (The Zutons) and Howie Payne (The Stands) what we have is a very solid debut effort that manages to avoid being dull and forgettable. What is most striking though, despite big arrangements that don’t leave much room for subtlety, is Harvieu’s vocals. They manage to give this collection of big tunes a distinctive edge and from the opening soaring strings of ‘Open Up Your Arms’ her voice is easily the most arresting aspect of the LP.

This is the kind of music that would have suited long wintry nights so that the listener can truly get lost in the orchestration. It’s hard to know whether she’ll take off commercially – more to the point, is there room for another singer of this ilk – but given that summer has been delayed significantly there is still time.