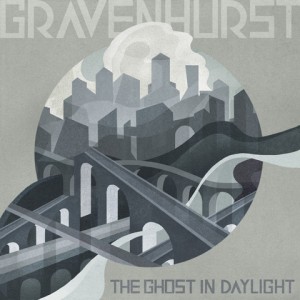 Whatever else he’s been doing for the last four years, it doesn’t sound like Nick Talbot has let much light in. The Bristolian returns with his first Gravenhurst album since 2007’s The Western Lands and The Ghost In Daylight is as moody and atmospheric as anything before it.

The gloom is almost claustrophobic at times, the effect like listening to Nick Drake but the sadness is reaching despair, the sweetness is bitter. Opener ‘Circadian’ is soothing but dangerous, almost hypnotic as it draws you in while hinting at an attack to come – and one that does midway through when a screeching guitar rips through.

Am I putting you off? Please don’t let me. Much of the music here is too beautiful for you not to enjoy, and the looming sense of danger only adds to the urgency of the record. ‘The Ghost of Saint Paul’ sounds vaguely like a nursery rhyme, but it has an undertone you wouldn’t want any kids to hear. On closer ‘Three Fires’, Talbot sings “All is quiet through the house / Sound asleep now / All is quiet, turn the key / Burn the house down” so sweetly and innocently it’s downright sinister.

There’s a feeling to much of the album like you’re being taken out for a walk late at night and sensing something is lurking in the shadows, ready to attack. The spell is only broken when the record over-indulges itself. ‘Fitzrovia’, at eight minutes eight seconds, wanders off somewhere around the six-minute mark and can no longer be made out in the dark. ‘Islands’, only three seconds shorter, opens up with mesmeric synthesisers but barely hangs in there as time ticks on.

Instead, the highlight here is the towering ‘The Prize’, which shows off the full, expanded sonic palette Talbot works with on his fourth album. It builds slowly but eventually takes flight as a majestic work, complete with the sort of string sounds Talbot has traditionally shunned. As they give way to a powerful guitar, a wonderful wave washes over you, and even if it is only lifting the gloomy tone of the album for a moment, it is a flash of light that completes the picture.