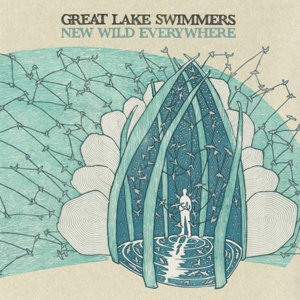 I had hopes for this album from Great Lake Swimmers, mostly due to this song, which is magical when played in velvety darkness. They’re a perfect lullaby band, beautiful, lush, soothing, though sometimes in danger of being a bit vanilla (then again – plenty of people like vanilla). They do peace and happiness brilliantly; title track ‘New Wild Everywhere’ makes me feel like I’ve stepped into a wholesome family film from the eighties. It’s perfect for camping, swimming, fishing, and general striding-off-into-the-sunset, with happy violins zigzagging all over the place and lovely male-female voices intertwining. It’s like going for a bracing walk, without actually having to get out of your seat. ‘Changes In The Wind’ is similarly upbeat.

However, ‘The Knife’ must be the least cutting song about a shiny sharp thing I’ve ever heard. It’s too pretty, too swathed in lush softness, to convey any kind of danger; if you want a song about a knife, listen to this instead. ‘Think That You Might Be Wrong’ has more bite to it, but Great Lake Swimmers are generally too noble to get angry; in ‘Cornflower Blue’ Tony Dekker sings ‘let’s gather the world and then burn it all down’, but he still sounds like he’s singing about peace and love. The message of ‘Easy Come, Easy Go’ seems to be: never mind, let’s go climb a tree. I can think of worse philosophies.

All of the songs are finely-tuned, lyrical and sensitive; the downside of their tranquility is that without a deeper undertow, sometimes they can feel like empty platitudes. The strongest is ‘On The Water’, which has the clarity and simplicity of a classic folk song. It manages to be both intimate and epic, as the singer is ultimately surrounded by a vision of the whole of nature ‘reaching back towards birth’, proving that despite their mild-mannerisms, this band can create moments of vastness.