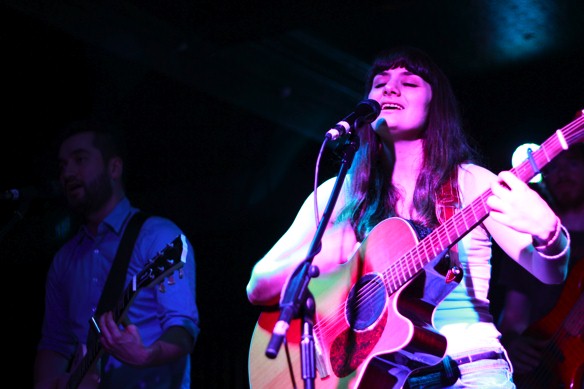 Ellen and her Escapades are finally assembled on stage and ready to play. The hum of the crowd dies down and she steps up to the microphone, takes a breath and…another song comes on the PA system. With a little shrug and a smile, Ellen retreats and strikes up another conversation amongst the band. The rest of us wait another five minutes.

But then we have become used to waiting for the Escapades. Three singles and an EP over the past two years have kept our appetites whetted, hungry but always left wanting more. At least tonight there is a sense that we’re all ready to move on to bigger things. The first chapter is closing, and the next is about to begin. This is a dress rehearsal as they give their songs one final road test before releasing the debut album early next year.

We’re hoping, in a sense, that this will be a going away party, too. Not that we want rid of the Escapades, anything but. But we’d like to see them graduate to the next level, which is where wonderfully constructed songs like ‘Without You’ and ‘Coming Back Home’ belong. Their sublime folk-pop brings the west coast sound to their West Yorkshire roots so much so that, while it might be borderline Baltic outside, it still feels like the end of summer in here. They’ve been our shared secret for a couple of years now. The time has come to watch them take flight.

Ellen & The Escapades are running a pledge drive to help get their debut album released, which you can join here.

When The Tide Creeps In by Ellen and the Escapades