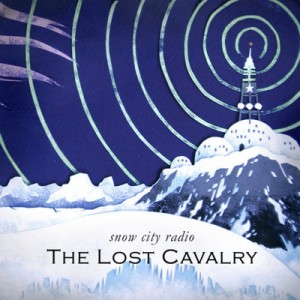 What sort of songs would you like on your car radio in Snow City? Assuming everything in Snow City is covered in snow, like some Christmas film vision of New York and that I get to wear one of those hats with the ear warmers, I think I’d go for something pretty similar to Lost Cavalry’s Snow City Radio. It’s atmospheric, unapologetically filmic and a little undemanding. But that’s okay I think because it has no pretentions to be difficult and, crucially, as light anthemic soft rock goes, it delivers, like the snow shovelled off those pavements in Snow City, in spades.

Lyrically the EP falls into that hazy area of pop music, just specific enough to be about something but generic enough to hook onto whatever you’re feeling. It’s functional music in the best possible way. But it probably has the potential to go further. It’s well arranged, richly layered in the manner of Beirut or Fanfarlo (a band with which Lost Cavalry in fact share a member) and with its obvious accomplishment it is perhaps only one big idea short of genius.

Two EPs in Lost Cavalry have found themselves a winning sound. When the snow melts and their winter warmer has done its job, I wonder if the spring will bring an album. When it does, if Lost Cavalry can keep it conceptually tight whilst letting loose musically, they will not only (as they do now) hit all the right buttons, it might just blow that car radio apart.