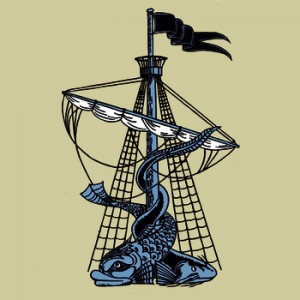 The oral tradition of storytelling has been with us for thousands of years. It helped strengthen communities, served as the only means of communicating important news of the day and, in its crucial role as the foundation stone of mildly popular works such as The Bible or Grimm’s Fairytales, has helped form the basis for contemporary law-making and morality codes. It seems fitting, then, that Twenty-One Crows take their role as folk musicians quite so seriously as they do. Folk music has been a form of the oral tradition for almost as long, and this Brighton four-piece are, with their debut album Sons of Liberty, attempting to bring that tradition back up to date.

With a mixture of forthright political attitudes, a grounding in history and a true sense of drama, they succeed for the most part. Their brand of sea-sprayed folk, notably almost universally backed by Rebecca Tann’s mournful accordion work, is an admirable vessel (pun most definitely intended) for their storytelling, a rich, instantly accessible  sound that runs the gamut from despairing, through righteously angry and into defiance. The tremolo-heavy guitar of ‘Gone From Me’ is reminiscent of a more subdued Anna Calvi, trembling with concealed menace, whilst album closer ‘I Am Not Afraid’ provides a platform for Jon Griffin’s hefty baritone to oscillate between intimate cracks and strength to match his most evocative lyric, “there’s an edge of tempered Sheffield steel inside of me.”

There seems to be a compulsion to imbue each song with a sense of mood that matches the story being told, but this need is not without its faults. The two most overtly political songs on the album become severely heavy-handed in parts, with ‘Guantanamo Blues’ message being let down somewhat by overwrought stabs of noise and the opening clarion call of “Guantanamo Bay / Hey hey hey hey”. ‘A Night in the Life’, a criticism of Western governments’ motivations in the Middle East, suffers a similar fate, with the characterisation of the Prime Minister as a poodle a little too close to the aural equivalent of a hackneyed newspaper cartoon. But it serves its purpose with regard to counterpointing the following song, an epic ode to those whose lives were lost at the Battle of Bazentin Ridge during World War I.

‘A Tale of High Wood’ is the most ambitious – and possibly most successful – song on the album, a true vindication of the folk storytelling form the band are aiming for. Questionable flageolet work aside, this is a song that merits the tale it tells, rising and falling with each new event and making for a truly gripping piece of work. Unlike so much music today, this album was not made to be inclusive – this is not meant to be a transcendent experience. Rather, this is a musical form that constantly impresses itself on the listener, forces them to pay attention, examine events and, most crucially for the storyteller, always leaves them wanting to hear the end. Twenty-One Crows may be revisiting the past without the intent to modify it, a practice often frowned upon by the modern music press, but they do so with the best of intentions – Sons of Liberty is, by and large, a consistently interesting and affecting listen, that succeeds on its own terms.