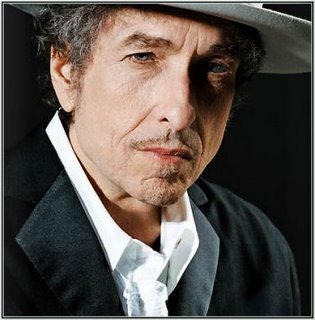 Bob Dylan’s been playing some of his songs for forty eight years. Forty eight. He’s a 70 year old man, and he’s been on tour since the ‘80s. Can you honestly blame him for wanting to mix things up a little? Besides, we all know that Bob must have a soft spot in his heart for Manchester, given the tremendous support the city gave him back in 1965 when he went electric. Oh. Right.

Anyway, I’d never actually seen Dylan live, so, fully prepared to endure sitting in a drafty arena playing the “guess what song this is meant to be” game, I persuade my folks to splash out a large amount of their hard-earned cash on tickets. That’s how rewarding it is for them to have free-loading children like me.

Mark Knopfler, as support, is backed by a celtfolkrock band who are both earnest and soporific. There’s pipes and whistles, a bit where two mandolins play at once, and a fiddle player who does some athletic leg-shaking, but until we eventually get two Dire Straits numbers the whole affair is entirely forgettable.

Anticipation rises after Knopfler departs the stage, and, hyped by a comedic taped intro that would befit a wrestler entering the ring, Dylan and his band appear, all sharp suits and more than a touch of swagger. Ripping into his opening number at a keyboard placed stage right, there’s a suspicion that Bob is here to have fun. Moving to the centre for a few songs, the suspicion is confirmed – smiling, dancing, playing a mean blues harp, Dylan is lithe and positively cheerful. This is a set of greatest hits and although the tunes have been remodelled to accommodate his raspy voice and strange yelps, they are still recognisable (after a line or two). Truthfully, Dylan’s strength has never been in his vocal, but there’s the suggestion of range and even occasional tenderness, especially in tonight’s Forgetful Heart.

That’s not to say the show doesn’t have its faults: in 1966 Dylan famously told his band to “Play it f*cking loud”, and it appears he has forgotten to retract that instruction. Perhaps a sound engineer’s well-meaning attempt to avert criticism of the vocals, it is so loud at times as to be oddly distorted. There are grumbles amongst the crowd too – a early high-tempo ‘Tangled Up In Blue’ prompts initial complaints, and portions of the audience don’t hang around long enough to hear encores of ‘Like A Rolling Stone’ and ‘All Along The Watchtower’ played at full pelt.

If you want to watch these songs played in the manner of their original recordings, you could spend a fraction of the ticket money on Scorsese’s documentary No Direction Home. However, if you’re intrigued by the thought of a grizzled septuagenarian finally enjoying playing to the crowd, you should probably catch up with the Never Ending Tour before Dylan reverts to type. The man’s an idiosyncratic legend.