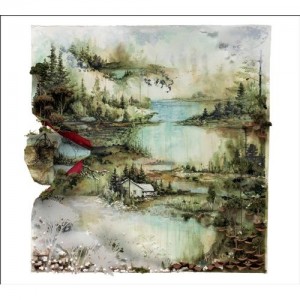 Justin Vernon returns with a more integral cast of collaborators for his second album as Bon Iver. The name is drawn from the French for “good winter” (bon hiver) and the often sparse instrumentation coupled with Vernon’s alternately hushed and soaring vocals seem fitting of that moniker.

The 10 songs on show, which were recorded in Vernon’s purpose-built April Base Studios in Wisconsin, showcase a fuller, richer sound in general than on 2007’s breakthrough For Emma, Forever Ago, a result of Vernon’s stated decision to “(bring) in a lot of people to change my voice… change the scene”. The upshot is that where that record was carried largely by Vernon’s acoustic guitar, there is something of alt favourites Grizzly Bear about its more ensemble-driven follow-up.

Several of the songs refer to a specific place, though seemingly not all are intended to evoke that location. The small village of Lisbon, Ohio is acknowledged by a short instrumental, Washington gets a surprisingly understated paean, while Vernon would appear to think fondly of a love in Calgary. The wilderness conjured up on Hinnom, TX, meanwhile, tallies with the description common to numerous religions of the Valley of the Hinnom as a place of slaughter – though Vernon’s reasons for locating it in Texas (there is no such town) are best known to him. All in all, a beautiful, haunting album.