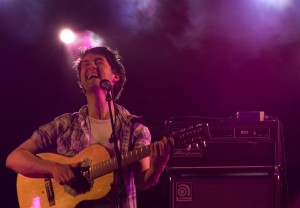 This gig did not start well, given that the average height of the audience seemed to be about 6’2”.  As someone who normally can’t stand those idiots who prefer to enjoy gigs through the screens of their cameras and iPhones, we found ourselves strangely grateful to the man in front, whose tiny digital screen provided FFS with our first glimpse of Villagers’ front man Conor O’Brien amidst the sea of giants blocking the view.

Needless to say, after listening to the opening two songs with our neck contorted into a ridiculous position, we played the young female card and wiggled our way between the giants to a spot slightly closer to the stage.  Comfortably installed behind two normal-sized females, we settled back on our heels and enjoyed a mesmerising hour of beautiful music.

Villagers managed to mix well known songs from their Mercury-nominated album Becoming a Jackal with new songs without creating any lulls in the flow of the gig or cause for distraction.  Their new music has a dark and melancholy feel to it (the opening song told a story about a little girl with a hammer in her hand) but mixed well with popular songs like ‘The Pact’.  O’Brien’s voice is incredibly powerful, and heard live has a deep huskiness that is missing from recordings.

Especially compelling was ’Pieces’ –  every time the lyric “I’ve been in pieces” was repeated, you felt that O’Brien meant it more, and you believed him.  Disappointingly the much anticipated howling at the song’s climax was somewhat paired down, but forgivable.  We don’t think anyone could be expected to howl on demand every night of a tour.

Villagers filled Shepherd’s Bush with their incredibly deep and rich music, and successfully started and ended the show with new songs.  Their success is testament to O’Brien’s skills as a songwriter, and gave a tantalising glimpse to what we hope will be a second album to rival their debut.