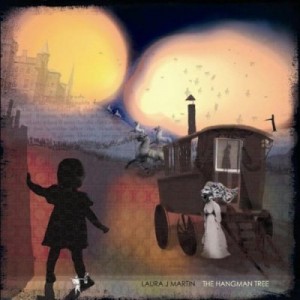 The eagerly awaited debut album from Laura J Martin promises much, and on first listen, (and second and third…) The Hangman Tree certainly delivers. At a time when female folk-based singer-songwriters are enjoying something of a renaissance, it would be safe to say there was a danger of having too much of a good thing, and for a new addition to this group to be seen as dull. But Laura manages to bring something fresh and unique to the table with her collection of quaint, folk-pop ditties.

Whereas her contemporaries have embarked on a sombre, mellow route of song writing, Laura has provided us with an album full of cheer and wit. One of the greatest things about The Hangman Tree is the musicality. Laura and her band are clearly very talented musicians, and the way in which Laura herself floats between flute, mandolin, xylophone and vocals with such ease is just one of the many reasons why this album is so endearing.

Laura once spent time living in Japan and this has clearly influenced her during the making of this album. Songs such as the delightful ‘Spy’ and the spirited ‘Fire Horse’ seem to tip a hat to her experiences in the Far East. Her mix of Japanese folklore and her own personal experiences (as seen in the sweet title-track) creates a journey for the listener to different worlds. Whilst first listening to songs such as ‘Tom’ and ‘Silent Maria’, I personally was transported to a Tolkien-esque haven of tranquillity (which I consider to be a great thing!).

Armed with a beautiful Kate Bush-style voice and a collection of enchanting songs, it seems impossible to not be charmed by Laura J Martin and her debut. And at a time when the world is in a state of depression, I appeal for more artists like Laura to steer us away from our New-Year gloom.