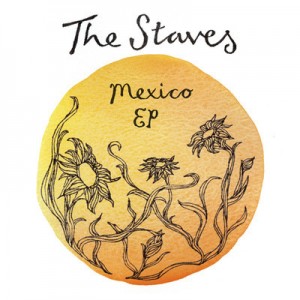 There’s something very woolly jumper about the Staves, as might be expected from graduates of the Liverpool School of Performing Arts.  Your enjoyment of the sweet-toothed folk tunes that make up the Mexico EP will depend entirely on your tolerance for music that exists at the more whimsical end of the spectrum.

Travis-picked acoustic guitars, ethereal harmonies and winsome lyrics float tastefully in the air like the aroma of home-made focaccia bread. The title track is the most obvious grab at the mainstream, it’s big on portentously clattering drums, with a sort of sub-Coldplay ambience that’s striving to sound epic, but fails to be emotionally engaging. It’s pompous where it hopes to be profound.

Icarus is more stripped down, and all the better for it. The beautiful harmonies are given the space to soar over unadorned acoustic guitar. It’s the EPs best moment, and if this is the direction the Staves are heading in then it suggests great potential.

I Try is similar, but marred by some unbearable lyrics about being ‘curled like a fieldmouse’ or a mere ‘wisp of a woman caught in a gust of wind’. It’s a sugary hit that spoils an otherwise very tasty confection.

The Staves do what they do very well, albeit in a sickly fashion.  Nevertheless there should be a sufficient number of sweet-toothed individuals out there to assure the trio some mainstream success in the near future.