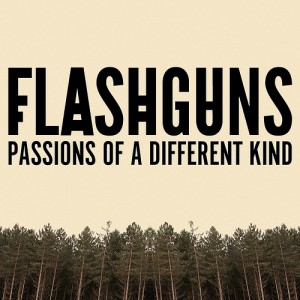 Wandering around the Underage Festival in 2009, I came across many bands that have since faded from memory. My search for the ‘next big thing’ seemed hopeless; that is, until I saw Flashguns. Their urgency as a live act left me in awe, enthralling me with their anthemic sound and grand hooks. Thankfully, they have translated this sound onto their debut album, Passions of a Different Kind; set to catapult the band to the fore of the indie music scene.

Opener ‘Sound of the Forrest’ leaves no time for meandering, capturing the listener’s attention from the offset and laying out their explosive sound, with the song reminiscent of Radiohead’s ‘There There’ but with a faster pace and forcefulness. ‘Come and See the Lights’ and the title track follow in this euphoric charm, propelling both songs to great heights, and the listener with them. This formula runs through much of the album, giving a level of continuity that enriches the experience; a clear mark left by producers Luke Smith and Barney Barnicott.

Yet it would be brash to suggest that the album is one-dimensional sonically; although it gives Flashguns a sound distinctly theirs, the album has a great level of dynamism. Standout track ‘Candles Out’ is an excellent example, a joyous track driven by swaying harmonies that add a rich sonic layer musically. ‘The Beginning’ opens with a few gentle guitar strums, with singer Sam Felix Johnston crooning over the sparse beat, before bursting into a shuffling drumbeat. There’s even room for a Kierkegaard quote! Closer ‘Racing Race’ is a subtle yet powerful song, with many melodious sounds vying for attention – sounding as if it could soundtrack the ending of a Western, where the hero is victorious.

And in many ways, the analogy is apt. Flashguns should feel victorious – the battle of their debut album is over, and on the strength of this record, they’ve succeeded with ease in producing something spectacular. Passions of a Different Kind is a bold and assured debut from a band that delivers on their promise, yet still shows evidence of even greater things to come.