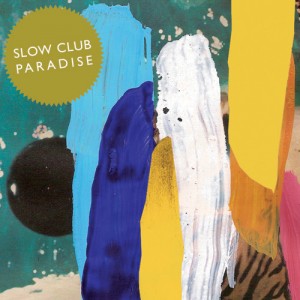 In the two years since their debut Yeah So, it’s clear Slow Club have done a whole lot of growing up. Where the debut delighted us with its quirky, often shambolic joy, it still strayed too close to being, well, twee. And if there were two people in the world upset that Slow Club might be branded twee they were Rebecca Taylor and Charlie Watson themselves.

So they have gone away and returned with a sophomore album that is at once their own, but a more complete, fully-realised version of themselves. They’ve added a layer, moved up a gear, and come back with an understated force, a power they probably didn’t even know they possessed.

The trademark sound remains – the melodic duets, meandering drum beats and delightful guitar licks – but the outlook is more mature. Anything masquerading as twee has been replaced by something altogether more gloomy. There is despair, you might even say some of this is a wrench – how else to describe Rebecca’s farewell to her grandfather, ‘You, Earth & Ash’?

There are moments of understated beauty, as ‘Never Look Back’ wraps you in its arms and hugs you to its breast, or the immaculate ‘Hackney Marshes’. As songwriters, Slow Club have blossomed here.

And yet they still retain all that made them so exciting in the first place. The exuberance of youth remains, most clearly on ‘The Dog’, although there are also wiser heads, and perhaps a more embittered outlook. This is most clearly captured on ‘If We’re Still Alive’, as Taylor and Watson sing, almost plead: ‘I think that next summer if we’re still all alive we should try to jump into some water and focus on getting high’.

If Slow Club wanted to shed the twee tag, this superb second album is going to do the trick.