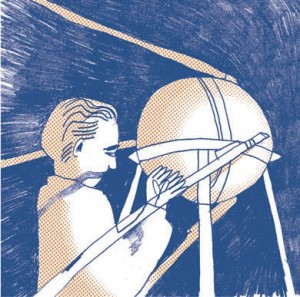 Vostok 5 is a collection of songs about man’s first uncertain explorations into space. Some of them are about men, both on the ground and in the rockets themselves; some who made it, some who never made it and some who helped make it happen. Others are about the many animals that these men used to pave their way into the cosmos. Some of the animals died, some of them survived. Many, if not all, were sadly never meant to return home.

Let me start by saying that this is not simply an album. In fact, it is perhaps important to start thinking of it not as an album at all, but instead considering the unique and ambitious project it forms part of.

As this record was being written and recorded by the five musicians that make up the collaboration (Darren Hayman, Duncan Barrett, Sarah Lippett, Paul Rains and Robert Rotifer), a large amount of rich and inspirational accompanying work was collated. A very beautiful collection of research, artwork, essay and discussion was amassed and documented in the form of a blog as well as an exhibition.

This blog beautifully guides you though the project’s development, from the first seeds of ideas through to the triumphant arrival of the finished CD, artwork and exhibition. I felt that it was very rewarding to experience the album this way, through it’s many parts and milestones. Because just like travelling into space, I should imagine, the journey is just as interesting and significant as the destination.

You really feel the dedication and mutual interest that the members of Vostok 5 share in its themes, stories and creation. The songs are threaded with the very essence of the stories and worlds that they explore. For example, in ‘A Breeze And A Little Piece Of Coal’, Hayman’s calculated synth tones eerily stutter across the track like that of an orbiting satellite sending test signals back to earth.

In fact, there’s a great picture on the blog of Hayman sat in front of a vast array of keyboards and synthesizers that bare a striking resemblance to an early Soviet space control panel (although of course just one keyboard probably contains more computer power than the first Soviet ship’s entire system).

Hayman’s second song, ’A Little Arrow And A Little Squirrel’ is wonderfully sung with the naivety and innocence of the space animals themselves. Likewise, songs such as Barrett’s ‘Maria’, Tigercat’s ‘Sometimes I Hit London’ and Hexicon’s ‘Michelin Man’, brilliantly portray the fascinating juxtaposition of what are very small and familiar human stories, with the comparatively grand and epic worlds and dreams that provide the dramatic backdrops.

It’s extremely refreshing to see a group of musicians really use music. It’s too often isolated in it’s self; and to see it being used like Vostok 5, to explore and react to a topic in such a direct way is a very reassuring thing.

It occurs to me, that just as the cosmonauts in their songs are taking great leaps of faith into an unknown future, Vostok 5 are perhaps doing just the same. Even if you’re not taken by their effort, (which I hope you are) you’ve got to admire them for doing that.

I often wonder what the future of music might be like, as the age of the big label slowly stretches into the event horizon and projects like this fill me with hope. Independent collaborative social projects that bring people together and know exactly what they are and what they want to achieve. This feels like progress.