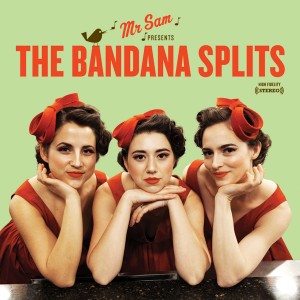 Alright, so you might say that the last thing the world needs is another post-ironic retro girl band – even if Dawn Landes is involved. That sort of thing exhausted the patience a long time ago. Remember the Pipettes? Anyone looking up the Bandana Splits on Google would be forgiven for wiping their mouths and moving on. Ha ha! Retro album cover, 50s clothes, doo-wop Cee-Loo Green covers… nuts to that, who’s next?

When I first heard this album, I knew nothing about them and wasn’t privy to any album cover art. I thought I was dealing with something altogether more hip but less knowing. Free from the trappings of their presentation these songs come across as crisp, quirky, and current; indebted to the likes of the Crystals and the Chiffons of course, but not self-consciously so. Judged by their own merits, they still work – even when you can’t see the polka-dots and the two-tone shoes.

Not that they’re a group entirely adverse to a bit of outright parody. ‘Ricky Dee’ and ‘Choo Choo’ overdo the naff 50s ‘baddabop badaboo’ shoopadooping, while ‘Stay if You Wanna’ has one too many references to lemon pies. Yet the harmonies are tremendous, and the tunes maddeningly infectious. Significantly, the album’s best moments, such as the bubblegum pop of lead single ‘Sometimes’, or the sweet cover of Benji Hughes’ ‘All You Gotta Do is Fall in Love’ are largely free from any girl-band paraphernalia. They also represent some of the most satisfying slices of straightforward pop music heard this side of the 21st Century.

These could be big hits if presented straight; as it is the Bandana Splits risk heading towards a dead end. Still, if there’s any justice cult status beckons. They shouldn’t have restricted so timeless a sound to so much anachronistic posturing, because while this sort of thing has been going on for a while now (since about 1959 in fact) it’s hard to think of anybody else who has captured the exuberance of the original Wall of Sound quite so well.