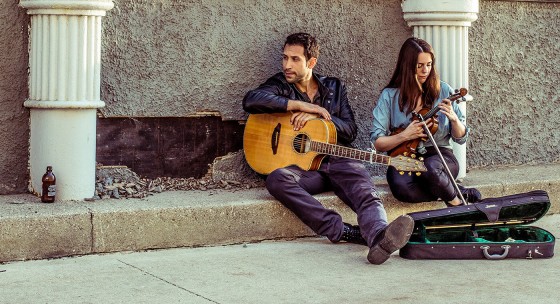 New York-based duo Sam & Margot have just got done recording their debut album with the help of Mr Simone Felice and the early signs – which you can hear below – sound lovely. That means it’s time to get to know them better, so we caught up with them to talk about neuroscience, living on an island, and burning down the New York Stock Exchange (in a manner of speaking).

Tell us a bit about your latest release.

(Margot) We just released our first music video for our single, ‘Burn It Down’, which was featured in the Milwaukee Film Festival. The entire video was shot in Milwaukee with an extremely talented team of filmmakers, including Brendan Jones and Ryan Bingham. They were very creative in the ways that they used pyrotechnics, built sets and scouted locations. The premise of the video is two struggling artists decide to take the current financial situation into their own hands and burn down the New York Stock Exchange. We were definitely a bit nervous upon releasing it and were slightly convinced we would be placed on the No Fly List, but so far we’re in the clear! Let it be clear, we do not believe in or support violence in any way. The burning was all tongue in cheek.

(Sam) We have been fortunate to play some amazing gigs over the past two years. The best venue we’ve ever played at so far is Webster Hall just after New Years (2015,) opening for our friends Almost Six Six. The place was packed, we had our full band and our words were connecting with the audience.

(Margot) I think the worst (and also best) thing about being a musician is that now a days, you sort of have to do it all yourself. There are definitely still labels out there and the potential for big deals, but when it comes down to it, two singer-songwriters who really want to make it in a world dominated by the internet, social media and free music, really have to hustle and run their music career as a full throttle business. We both studied theater, and Sam also studied neuroscience, but we most certainly did not study anything related to business. And now I think we wish we had. There are a lot of elements at play while pursuing a career in music, and the most important part is to remember that we do it because of our music and our love of playing. Thankfully we’ve been able to make up for our lack of technical skills with hustle and grit.

(Sam) Staying inspired is a big part of sustaining our art and career. I am inspired by powerful art, whether that is another song, record, painting, movie or novel. I heard Rick Rubin (legendary record producer) say on the Tim Ferris podcast that that’s how he believes artists stay inspired and realized that it works well for me too. Anything that openly expresses raw, unfiltered humanistic rage, that’s what makes me feel alive, that’s what makes me grab a pen and a guitar and not come out of a room until I have a new song. I’ve noticed inspiration comes sporadically, where I’ll have days or weeks where I can write an entire records worth of material, or I’ll just bang out the workings of a novel or a screenplay, and then there can be months on end where I’ll struggle to dig anything meaningful out of me. I think it’s something that can be worked on and improved upon but I don’t think the best material comes from discipline. There’s a balance between letting the mysterious energy arise and really forcing it out. Sometimes life has to be lived and maybe a few years later those experiences are ready to be turned into material and can bring that creative insight.

(Sam) If I were a billionaire, and woke up with a ton of influence and resources I would take probably about 50-100 million and just get all the art, videos, songs and movies that I’ve been wanting to produce for so long out of my system. Then I could start focussing on saving the planet or doing something nobel. We’d probably move to an island, like Richard Branson, live it up, enjoy ourselves, make a ton of art, and then we’d burn it all down! If there’s one charitable cause I would like to contribute to it’s homelessness. How is it that we are at the peak of technological optimization, on the cusp of major break throughs, mining asteroids, mapping the human brain on super computers but millions of people still go hungry and sleep on the sidewalk. The free market is systematically flawed, does not work for everyone, and human beings that have trouble adapting to this crazy landscape should be cared for. This can’t be solved by one generous billionaire, but hey, if I was in a position to help out like that, I would.

Which of your songs is your favorite and why?

The American Enterprise is our favourite. It’s an Anarchist Ballad about coping with a raging empire. We’re willing to look at the unhappy truths about what’s going on in the world, but when shit hits the fan we just want to be with each other. Also, Simon’s (Felice) drums are next level amazing on that track as well as David Baron’s synth.

(Sam) Our plans for the future are to play more shows, make more videos and then make another record. We are in this for the long haul, and would like to tour Europe and more of America. The struggle is figuring out how to do that. I guess the economic term is Sustainable Growth. In the near near future our plans are to play shows, promote our record and keep connecting with people who like our music and message.

Hugh Trimble. He was a huge inspiration for us to start songwriting and one of the best songwriters on the planet. Aaron Lee Tasjan, Marie Daniel, MaryLeigh Roohan, Argonaut & Wasp, Bitterheart, Clara-Nova and Hannah Gill.

← Album | Widowspeak – All Yours
Album | Dave Heumann – Here In The Deep →