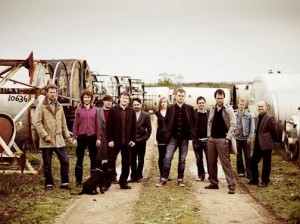 Legendary folk group, Bellowhead, have released a video for their new single Roll Alabama. The single will be the third from the band’s current album, Revival, and will be released officially on April 20th.

April is set to be a very busy month indeed for the band, whose 11-strong line up will also be embarking on a full UK tour, playing the following dates:

What’s more, the group have also just been nominated for BBC Radio 2 Folk Awards, in the ‘Best Group’ category. This is the third time the group has been nominated for this particular award, having won both times previously. They have also won the award for ‘Best Album’, and ‘Best Live Band’ a whopping five times. The BBC Radio 2 Folk Awards will take place in Cardiff on April 22nd.

You can get tickets to go and watch Bellowhead online from Ticketmaster. Watch the video for Roll Alabama below: