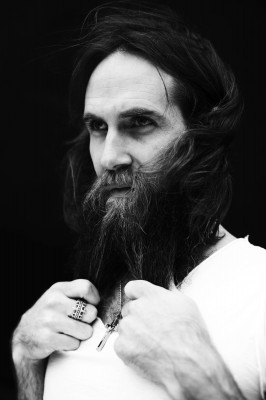 Josh T. Pearson’s Last of the Country Gentlemen was released this year to widespread acclaim, with this very website describing it as a ‘sparse, delicate and unrelenting trawl through the darker recesses of the soul’. It has found itself in the upper echelons of, if not at the top of, pretty much every ‘Best of 2011’ list, to demonstrate its appeal. With the heart-wrenchingly beautiful and devastating tracks he is equipped with, one would expect something titled ‘An Evening with Josh T. Pearson’ to be a rather serious affair, with Pearson earnest in his delivery of emotionally-charged tracks.

Not so. Josh T. Pearson instantly shattered these expectations of mine, stepping out to greet the crowd of the grand and majestic Barbican by sarcastically shouting, “What a shithole!”, before labeling the venue as “just another dive”. With the crowd already won over, he continued by making light of the stage setup, which consisted of just him, a guitar and a microphone, by jokingly stating that “the stage could be a bit bigger”.

Despite his amusing protestations, the Barbican was the perfect setting to witness Josh T. Pearson emotionally open himself up on stage. The ability of Pearson’s lengthy ballads to soothe and hush the audience is incomparable to other artists, as he gets the respect and quiet he deserves from a clearly enthralled crowd. In an instant he is able to fill the space of the large venue with just his own voice and guitar, before reducing his voice to a whisper and allowing the space to grow and linger around him, on songs such as opener ‘Sweetheart, I Ain’t Your Christ’ and ‘Woman, When I’ve Raised Hell’, giving a resonance to every word that falls from Pearson’s mouth. His guitar playing is faultless, with its intensity the perfect companion to his passionate voice.

Thankfully the prolonged songs have intervals between them, with Pearson trying out some of his best jokes to an audience egging him on. Cynically, but hilariously, he asks ‘What’s the difference between a large pizza and a musician? A large pizza can feed a family’, before delving into more biting and crude jokes. These jokes offer the chance for the audience and performer to connect, and allow a welcome break between songs, that makes each one feel just a little bit more important.

What a year it has been for Josh T. Pearson, and on the basis of this showing, deservedly so. His album is one of the finest of the year, and is even more of a tour-de-force live, as he allows the audience to be a part of his heartbreaking and emotional tracks, a part of the joy Pearson has found in the misery he once had. How stunning, how extraordinary and how soon we hope he returns to the UK.

Among the many ‘Best of’ lists Josh T. Pearson has topped this year is that of Rough Trade, who are now selling a special edition of Last of the Country Gentlemen with a free Christmas EP. And for a limited time only you can download an alternate version of ‘O Holy Night’ via the link below.

And if that’s got you feeling all Christmassy, don’t forget to check out our compilation For Folk’s Sake It’s Christmas 2011, which is being sold to raise money for the Integrated Cancer Centre. It features songs from The Leisure Society, Kathryn Williams, Devon Sproule, Darren Hayman Caitlin Rose and many more. For Folk’s Sake It’s Christmas 2011 is available to pre-order now from Bandcamp.