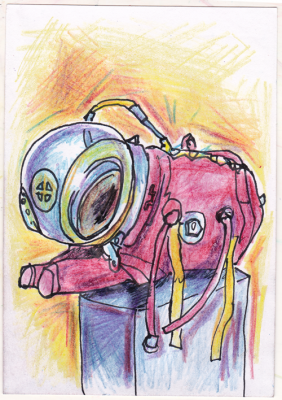 Bobik (Big Bull) ran away a couple days before the flight, and did not return. A stray was grabbed off the streets of Moscow and dubbed ZIB, a Russian acronym for "Substitute for Missing Dog Bobik".

FFS favourite Darren Hayman has contributed songs and drawings to a London exhibition Vostok 5, on People and Animals in Space.

In FFS’s mind, there’s not much better than creativity and geekery combined. If you agree, you can see the exhibition from 1-7 September at The Outside World gallery in East London. And see the members of Vostok 5 perform at the Wilmington Arms on 21st September.

As well as the exhibition, there will be an album featuring 9 exclusive songs by Tigercats, Hexicon, Darren Hayman, Rotifer and Feverdream as well as featuring members of The Wave Pictures, Allo Darlin and Moustache of Insanity. The record will be available to buy at the exhibition, Rough Trade East, and online through Hefnet from next week.

Darren has contributed 27 drawings of dogs that were sent into space, one of which we can exclusively bring you here. It’s Bobik’s space suit >>

Little Arrow, Little Squirrel, below, is Darren’s song about Belka and Strelka, the first dogs to be sent into Earth Orbit and remain alive.

You can find out loads more about how the exhibition was put together on Vostok 5’s excellent blog.