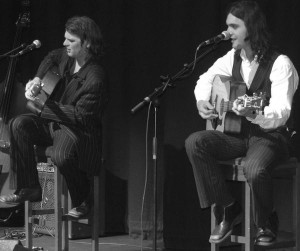 Folk-roots duo Hickman & Quinn have just self-released their debut album Times, so the panel went in to check out the results.

Louis Gilbert: The legacy left by acoustic pairings is not a good one – see Turin Brakes – but thankfully these guys have a lot more to offer. Their songs follow the recent trend led by Mumford and Sons with rising harmonies and driving choruses. It’s all very well done with some highly technical guitar work. They have played prestigious gigs with the Jools Holland Orchestra and Seth Lakeman, and seem like a perfect fit for a Sunday afternoon on Radio 2.

Thomas Moyser: Hickman & Quinn sound like nearly every musician on the traditional music scene, only not as good. They’ re competent players – but being able to hold a paint brush isn’t the same as creating a work of art. Their lyrics are a splodge of undemanding cliche. Their idea of an exciting arrangement is cutting out the guitar for a second on the last line of a chorus. I fear they might be just the sort of band who will get naively booked by every trad festival for the next two years by music directors who mistake youth and modern sensibility for vibrancy and innovation. If that music director is you, please please say no to Hickman & Quinn, for everyone’s sake.

Ian Parker: Hickman & Quinn make earnest, traditional folk music. If I tell you they’ve opened for the likes of Seth Lakeman, you’ll get the idea. It’s a well-worn format, and they do it well. Producer Andy Bell is working from his KT Tunstall playbook, rather than his Seasick Steve one, and there is plenty of polish applied. The problem is that, as they pass down this much-travelled road, it’s hard to detect much that’s new, much that makes them stand out. Accomplished, yes. Original and grabbing? Sadly not.

Check out Hickman & Quinn for yourself here.