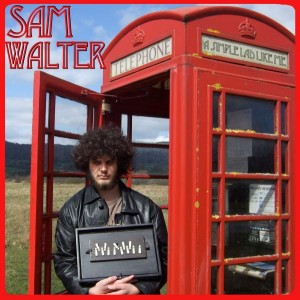 Malvern’s Sam Walters has a string of endorsements on the back of his growing reputation on the festival circuit. So what, aside from a fantastic beard, does he bring to the party?

Louis Gilbert: Now this is an interesting one. Sam Walker is a singer-songwriter but if you’re expecting songs of loves lost over a gentle finger-plucked melody, think again. Sam creates folk music of old and I mean really old. It’s drone based music but not like Sun O))) but more like the bagpipes of Scotland or the drone of Indian folk music. It sets a lovely bed for Sam to sing tales of yore. You will be pleased to know he has a beard and probably some ale of sort. He has a lovely voice which would resonate beautifully in a church. It reminds me more of a one band man John Taverner which can never be a bad thing.

Thomas Moyser: Unusually for the New Bands Panel, I’m already familiar with Sam Walter, having heard him sing once before, sitting alone on the grass at Towersey Village Festival with his little music box and big, arresting vocals. I was intrigued by both the oddity and antiquity of his voice, which despite being often harsh and aurally demanding, has that invisible timelessness that folk singers crave to bridge the chasm between themselves and the ageing material they perform. His choice of songs matches this perfectly – What an Age to be a Young Man seems aggressively at odds with the maturity of his voice and the solitariness of its arrangement. A full album would demand more light and shade than Walter currently provides but as far as the oral tradition goes, I like these songs immensely.

Ian Parker: Sam Walter’s thing is his voice. It’s his lead instrument, and his main selling point, and he twists and distorts it cleverly. But unfortunately he does so around lyrics that let him down. The minimalistic music is of the oldest of styles, without the tales to carry his songs along, there is little to properly engage the listener. While there is a place for his kind of thing, this one is not for me. One mitigating factor I’ll mention is that his reputation is built on live performances, and I’ve only heard the CD. Problem is, it’s not got me queueing up for tickets.

Check out Sam Walter for yourself here.