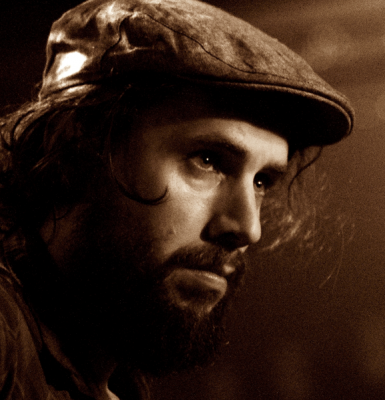 Pete Roe is a decent man. He’s got dignity all over. You discover that the moment you listen to his music, influenced by the right and wrong doings of his close friends, the world, the simplicity of nature and the moral principles infused in him. You also discover that the moment you meet him, humble, smiling and curious to learn. After an intimate, moving and honest performance for the launch of his new EP The-Merry-Go-Round at the Luminaire, Mr Roe talks to FFS about music, storytelling, touring, and… more music.

FFS: Tell us a little bit about your background in jazz and the Bristol area you hung out in for a while.

Pete Roe: Yeah… well (laughs)… I played jazz loosely… really bad jazz. It was a question of playing whatever gigs came along; that’s how I learned. We used to get the bands play under the premise it was going to be jazz, but it wasn’t… (laughs).

Kind of what I am doing now but more piano-based. I used to live above a jazz pub called The Old Duke and luckily I did play with a few of the old jazz bands there…

Must have been interesting…

Oh yeah! It was amazing. Very New Orleans. I definitely learned a lot. It was a great place to learn.

So how come you switched from piano to guitar, from jazz to folk songwriting?

Ha! Well, a guitar is easier to carry around! (laughs). I guess I found myself writing a lot more on guitar. Songs would flow and guitar was the provider of the music in my head – I found it a lot easier to write. For the piano, all my songs have too many chords… it just gets too complicated. I still find piano easier to play though…

Do you miss playing it at all?

Hmmm. I miss gigging… I mean, I play a lot with Laura Marling but they are obviously not my songs on the piano, you see.

Why did you choose to record your EP live?

Well, I’ve been touring a lot, songs came out while on the road, I’d play solo, supporting bands and it kind of made sense to record it that way.

Has your music been influenced greatly by the artists you’ve been touring with?

Of course. It is impossible not to be influenced by them in one way or another. I do think that consciously I am quite different to them, like Laura or Mumford & Sons, but there are surely elements that seeped in somehow. I have found that rehearsing with people before a tour changes the way you see things. Like when I was touring in America with the Smoke Fairies, they have got these marvelous interweaving guitar parts, and then at the last gig of the tour I found myself thinking onstage ‘ Oh Hold on, this sounds a bit like that part!’. So it does get in there whether you want it to or not.

Of all the major influences (songwriters, musicians…), which ones would you say are the top ones? In terms of wanting to play or even choosing the style/genre, your own identity?

(Long pause)…. I think the people that made me realize that I should play music, and it hits you like ‘Yeah, I want to be in a band’… but also made me realize I wanted to strip down to the basics, that it was really possible to do were John Martyn… I love his solo stuff… Gillian Welch….it’s just her…oh so, beautiful… ahhh, definitely those two. They are so good at leaving stuff out. Gillian will write a song with hardly anything, really, really simple…

It’s interesting how a lot of people confuse maturity in music with the extra addition of detail, more elaborate sounds…

Yet it is the opposite… that was one of the hardest things when doing this EP – refraining myself from adding layers and layers… It came down to me sitting in a room with a guitar, playing the songs. And the worst was actually calling friends and people who were supposed to play to say ‘actually, it may not be necessary…’. But it didn’t need it! Then again, it made me feel a bit  a bit bad, like … ‘aaww, this is all about me’, kind of thing. But hardly no-one makes a solo record nowadays. It’s really rare. But that was also one of the key points I wanted to bring across – this is a beginning, I suppose.

It seems like whenever someone starts in a band, as a team player, if one goes solo, things do not work that well… do you agree?

Yeah, I think it depends on the genre and dynamics of the band, of course, and how long you’ve been at it… it’s just not as good! (laughs). It’s not always the case, there are few very good exceptions…and it happens the other way around… one artists gets a band and it is suddenly too much! (laughs) I don’t know whether I am doing that right now with my band… I can’t tell! (laughs).

How do you see yourself, as a writer, musician, storyteller…what comes first?

Oh, oh… I don’t know. It is all a bit of a blur…(laughs). I guess, whenever people ask me what I do, I usually say: musician. So that’s probably the best answer.

Do you consciously sit down and say, ‘I’m writing a song today’?

Well, they tend to come when I’m sitting down practicing. Melodies appear, the chords… then I add the lyrics later. I never record songs, I may scribble a bit, but not much. If they’re not in my head the next day, I scrap them off.

How much does the song evolve from the moment you finish it until you record it or use it in your set?

Not much. Maybe I change phrases around lyrically but I like to keep it as a representation of a moment. I’m not a big fan of re-writing.

They’re pretty much all true. Some of my songs are about friends’ situations which they find themselves in. Like ‘Oh man, I have no idea what to do about this’. You know, when they are in a relationship and such, and I cannot work out a way to tell them what to do. So it works its way into a song. And you know, I’m not going to tell them that their name is written on it…(laughs).

Do you feel like the best songs come out when you’re going through a rough time, when you’re broken-hearted?

Yes, definitely. No question about it.

So I guess you need to feel the same way as your friends to convey the message properly, right?

Hmm, ha! Well, it is harder to write because you don’t know what they’re going through completely but you can feel it to a certain degree… It is always worth a go, right?!