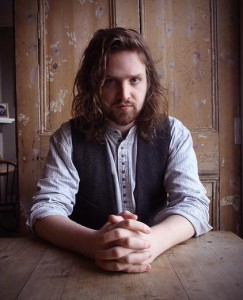 Will Varley has carved out a successful career as a musician and writer through being hard working and personable, roaming the country playing shows to build a following and setting up Smugglers Records, a collective rooted in the ideals of musicians looking out for each other, all the time letting his individuality and sense of humour shine through. Now 26 and with his hotly anticipated record As The Crows Flies released to strong critical acclaim, FFS discusses the inspiration behind the songwriting with Varley, and discovers him to be a truly lovely man.

As folk is particularly popular at the moment, how do you ensure that your music retains a unique and distinctive ‘flavour’?

I’m often told I’m not a folk musician at all, so it’s very reassuring to be defined in that way. I haven’t come from any traditional background or discipline, I’ve just always written stories and songs for as long as I can remember. I’ve never really tried to be distinctive either – in fact I’m happy to admit that over the past twenty years I have done the exact opposite and tried to emulate many, many songwriters, some of which are still quite obvious influences in my music. If you try to be honest then that’s all one can hope for. I think as long as you’re honest you’ll never sound exactly the same as anyone else.

You sprinkle humour very effectively through your lyrics; is this something you’ve always done or did it develop later in your song writing?

I spent over ten years playing open mics and acoustic nights at least a couple of times a week. They’re the toughest gigs of all. When I was 15 I used to go in there with my fake ID, singing about war and suicide bombers and heartbreak, and it was ridiculously intense. I think you can lose an audience if you don’t cut the tension here and there with a couple of jokes. Then you do something sad, or serious afterwards, and its a lot more effective.

Is your song writing triggered by specific moments of inspiration or the product of a more drawn-out process?

Often I’ll see something or experience something that I can’t file neatly into my head and I just keep coming back to it. These are the things I’ll usually write about. Sometimes I’ll challenge myself to write a song though, like with ‘Weddings And Wars’. I challenged myself to write a history of the world in a song, just to see if I could do it.

What is the most exciting experience you’ve had in your life, musical or otherwise?

Wow. That’s a tough question. I once woke up in a skip in Paris and narrowly avoided being emptied into a dumpster truck. That was very exciting. Musically though, setting up the whole Smugglers Records thing with Cocos Lovers has been, and continues to be, an incredible adventure. We run our record label as a collective and subsequently spend a lot of time meeting people and touring together and generally doing exciting things, like interviews!

Can you remember the best piece of advice you’ve received as a musician?

There’s an Indian guy called John who drinks at my old local pub. He used to run the newsagents next door until Sainsbury’s came to town and put him out of business a decade or so ago. He saw my first ever gig when I was 13 years old and he’s come to see me here and there over the years. He always says the same thing, comes right up close to my ear and says, “Step by step, take it slowly my boy, step by step, we’ll get there.”

If you could play anywhere, whether or not there’s a stage there, where would you choose?

Happiest moment of your life?

I’d like to think it hasn’t happened yet! I’m not sure really. Happiness is relative. I just had a bacon sandwich and a can of coke. I was pretty happy.

How are you planning to vary or develop your sound for your next project?

No plans. Just gonna’ write another bunch of songs and then see how they come out. Got some recording dates pencilled in for December so I’ll get some songs finished while I’m on this tour and hopefully have something ready by then. I like writing in autumn. Is it autumn now?

For gigs, and to buy As The Crow Flies check out Will’s website here