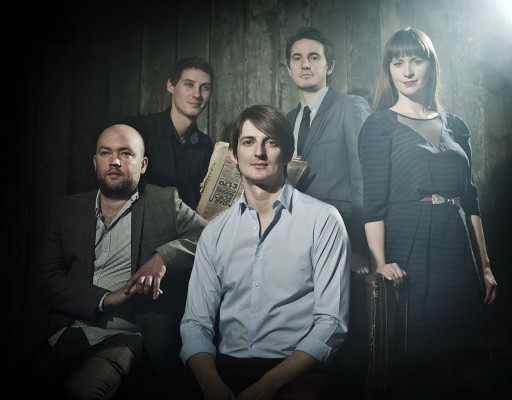 You’ve spoken before about the themes of some of the songs. ‘Sober Scent of Paper’ being inspired by Sylvia Plath and ‘Fight for Everyone’ is about the Olympics last summer. ‘One Man & His Fug’ is one of my favourites on the record, what inspired you to write that?

There are actually a few songs – that one, ‘Forever Shall We Wait’ and Everyone Understands” – that all have a similar kind of theme.

When I was living in Burton-on-Trent I kind of had a lost decade doing crappy jobs that I hated and not really pushing myself to do anything because on the sideline I was playing in bands. I’d go and rehearse and play gigs in the evenings. It was just about that whole period – years and years of doing crappy jobs that were going nowhere. I felt like I was wasting my life away

‘One Man & His Fug’ is just about the apathy that was surrounding me in those years. It wasn’t just because I was lazy – it was partly because of that – but also because I couldn’t see myself doing anything long-term other than music and I couldn’t put myself into anything.

I worked in a record shop for six years and they kept saying ‘Do you want to become an assistant manager?’ and I’d say ‘No. I’m happy just doing the very basic minimum,’ I didn’t want to put anything of myself into that job.I wanted to leave at six o’ clock and go home and think about music.

It’s about that whole kind of ten-year period of doing that really. I felt like a let down to my parents and there’s quite a few references to that. I don’t really know what I did with my life then I suddenly realised I was 30.

I’d see people who were younger than me get these jobs and then they’d moving off and doing something else. They were actually going off to do something with their lives and I was still holding out this crazy hope that I was going to be a musician. Bands I’d been in had split up because people wanted to start a family or they’d got a job that meant they couldn’t commit to the band anymore. I’d be the only one who was left standing at the end. Somehow it paid off. I’d really given up hope when the Leisure Society started taking off and these songs are all drawing on those experiences.

I can look back on that now and it’s got a warm glow of nostalgia to it, those experiences shaped who I am today and allowed me to write. Because the songs that I used to write in those days were rubbish. It was only when I moved down to London that the culmination of all those experiences and all that depression allowed me to start writing lyrics that I thought had any worth and were worth sharing with people. So it’s a warm look back on depressing times.

You said you were worried about letting your parents down. Are they happy to see you doing well with the band now?

They’ve always been incredibly supportive. The way it transpired was that I was supposed to go to university but because I was in this band with Shane [Meadows] and Paddy [Considine] I didn’t go. And they were a little bit devastated by that because I’d always been really academic at school and it was only when I started doing my A-Levels that I started playing guitar and I started skiving off school and going to the art college to rehearse instead.

They were just frustrated because I had been academic and I “was going to do so well at University”. But I deferred three years running and never went and did this course – I was going to do Geography and Geology. So they were always supportive but they were really frustrated in case it never happened.

It was really nice when we played the Barbican and they came down to London – to see a full orchestra playing the songs that I’d written. They were really emotional afterwards. Even my dad and he’s your typical English stiff-upper-lip kind of man. But yeah, they’re really proud of me now. They still get a bit terrified that I’ve not settled down and got married and had kids and I never have any money. But they’re really proud and they’re really big supporters.

‘Another Sunday Psalm’ has the lyric ‘saying in 15 words what took me years to hang my name upon’. Is that on a similar theme?

Another Sunday Psalm is about creativity basically. I was comparing creativity to an unrequited love and also to religion. That creative spark that comes and the inspiration. It’s almost like a religious experience. Like when I wrote ‘Last of the Melting Snow’ [on first album The Sleeper], the lyrics just came from nowhere and then I kind of developed it and wrote the song.

It’s striving for that moment and the perspiration you put in before you get the inspiration so that song is about that. And how that creative process is the only thing that truly makes me happy and my life is constantly striving to create and to write new things and it doesn’t always happen so it can make you very sad but it is the only thing that makes me truly happy so that’s what that song is about.

Is it that you need songwriting to make you happy or do you need to be sad to write a song, which way round is it for you?

If I’m really upset or depressed or frustrated about something that’s what makes me want to write and you can sit with a guitar and that’s when ideas come out. But when you’re completely contented you’ve got nothing to say because you’re just happy living in the moment and everything’s fine. I’ve said it before but happiness writes white with me, if I’m feeling a bit blue about something that’s when I can write.

There are moments of inspiration that seem to come out of nowhere. But I run over ideas endlessly in my mind. For instance yesterday I suddenly realised I hadn’t written a song for ages so I was listening on my iphone to all the old ideas that I’d recorded over the last year. And I found about five or six little tunes that hadn’t got any lyrics that I thought were nice.

So all night long without meaning to I was running over those ideas and running over the melodies. It’s a subconscious thing that’s constantly going in the background which means that I’ve got a terrible attention span and I’ll be talking to someone and suddenly I’ll realise I’m not listening to what they’re saying at all, I’m just thinking about something else.

I think it’s that kind of constant buzz. Suddenly you get inspiration and you jump on it and it’s like it’s something out of the blue, but I think there is that subconscious thing going on in the background which makes you pretty rubbish at doing anything else. So I’m a pretty rubbish human being generally but occasionally I write these songs.

You donated a brilliant song to our Christmas album last year. Thank you! Was the process of writing and recording that different from the album?

We worked through the night to try and get it done cos it was like ‘Oh shit we need to get this together!’ It was another little idea that I’d recorded on my phone just called ‘Christmas Mistakes’. I’d written it on the ukelele the Christmas before but I hadn’t written any lyrics to it. I think we had two days before we had to get it to you so you could get it mastered in time. And we went round this guy Ben Trigg’s house – he was playing cello for us at the time – and stayed up all night and recorded then mixed it. But I’m actually really happy with it, I really like it.

It’s made me think, I’d really like to do a little Christmas record. I couldn’t sustain it for a whole album, but I’ve got a couple of other songs I could perhaps develop.

What’s the plan for album four? Have you started thinking about it already?

I’ve got 12-15 really basic embryos of songs, that are all completely different in style. There’s four groups of songs that are all different styles and I’m thinking of doing four different EPs and releasing them like that. So I’m starting thinking about the next stuff now.

You have to keep writing and creating.When you’ve still got the inspiration you’ve got to use it because I think it’s finite how many songs you can write in your life… How many decent songs. Not many people have a long career of writing good songs. I feel like the clock’s ticking and I’ve got to keep writing.

There’s something to do with getting older that makes you less creative. I can’t think of many people who write really great songs into old age. Apart from maybe Tom Waits and Neil Young – but nothing like the stuff he did when he was younger. This is our third album. I probably never thought we’d have three albums but I’m definitely thinking about the next one already.