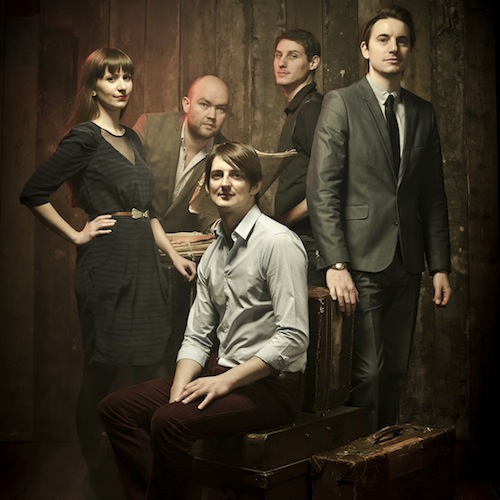 The Leisure Society released their third album Alone Aboard the Ark at the beginning of this month. After a short stint in Europe, they’re about to complete their UK tour with a sold out show at the Queen Elizabeth Hall in London. FFS caught up with songwriter and frontman Nick Hemming…

FFS: Alone Aboard the Ark is your third album, does it get easier to release records out to the world?

Nick Hemming: It’s always a bit terrifying when you’ve spent so long working on something and you put it out there and think ‘are people going to like it’.

I thought it would get better because we’re all hugely proud of it, but that almost makes it worse in a way. You think ‘I love it so much, it’s the best thing I’ve ever done’ and if everyone doesn’t get that it’ll be hugely devastating.

It’s the first one that I can actually sit down and listen to and actually enjoy it in some way. With the other two I pick them apart and think ‘I wish that sounded better’ but with this one sounds pretty much perfect – or at least how I envisioned it. So that’s really nice.

Can you pinpoint what made difference with that?

The main thing was recording it in a studio with somebody who knew what they were doing.

Christian [Hardy – the band’s pianist and co-producer] and I had been learning as we went along as far as producing goes – and with limited equipment. This time we had all the stuff at our disposal that we could want and an engineer who knew how to use it. And also we were able to record everything live.

Before we’d lay the string parts down one at a time and overdub them but this time we had a string quartet in the studio and it just makes a much nicer sound. You can hear it all happening live whereas before I was recording loads and loads of different things. And I’d think ‘how are we going to make that work’ and then I’d go and work something out. This time we had people in to do it live and it worked out much better

We deliberately made it a little bit sparser.We wanted more space on the album – everybody said that right from the start. I’d got a bit carried away with Into the Murky Water. I was like a kid in a sweet shop because Helen [Whittaker – the Leisure Society’s flautist] was at Trinity [Music College] and I had access to all these classical musicians so I’d just go off on my own and record.

With this one we decided we’d make sure there were moments of space when there was not much happening – just an acoustic guitar and a voice. And also all the orchestrated songs were written down before the people came in so we knew roughly how it was going to sound.

As we were recording the rhythm tracks – the drums, bass and guitars – in the first week, Helen and Mike [Siddel – violinist] were in the other room working on scores. So we’d record a couple of tracks and then go in and listen to what they’d done. They spent a week developing these parts. They had to do it in a really tight time frame because we had a week to record all those rhythm parts and then the next week the session musicians were booked to come in and record all these parts. I think it worked pretty well that way.

Mike’s amazing with strings and Helen’s amazing with woodwind so between the two of them they bashed out ideas and I had a few brass ideas that I’d already written when I was demoing the songs in the first place. So between everybody we bashed it into shape and luckily Mike and Helen have got that grounding in classical music where they actually know what they’re talking about whereas everybody else is a bit kind of instinctive but actually it was a really nice balance.

That reminds me about what Tina Fey says about comedy – you need half of your writers and performers to be natural, visceral comedians and half to be classically trained in the art of comedy. Too much of one or the other and it doesn’t work.

It’s great because sometimes you can know too much and it will inform what way you go sometimes it’s best to ignore the rules and do your own thing but then it’s also good to have someone like MIke and Helen who know all the music theory and know how harmonies work and they can say ‘well that’s probably not going to work’ it’s good to have a balance of the two things.

There’s been some changes in the line up, with Darren [Bonehill – Bassist] leaving, and there’s no Will [Calderbank – cellist] on this album either.

Will didn’t play much on the last album either, that was when we were parting ways with him.

With Daz it was a bit of a weird one. We haven’t spoken about it much. He was slowly withdrawing because he’s got a family and he has a proper job – he’s Assistant Headmaster at a school. We were doing all our tours in the school holidays and it was not ideal – if we did stuff outside the school holidays we’d have to get a session player in. We knew it wasn’t really working.

He came in for the first week’s recording and put some bass lines down, but we barely saw him again after that. We made it clear that we really wanted to tour this album properly and we knew he couldn’t commit to that. There was no big confrontation or anything.

He’s coming to the first gig of the tour and I think it’ll be a really emotional night. It’s really weird cos he’s such a lovely guy and he was great in the band but it just got to a stage where he was having to spend more time with his family and with his job, it was difficult to be away from home. It’s amazing it lasted as long as it did really.

The guy we’ve got in now is a professional bass player who plays all the time and he seems to be fitting in well. I don’t want to jinx it but he’s a really great musician, he’s really quite involved in the arrangements and stuff. Jon Cox his name.

How did you find him? Did you hold auditions?

We auditioned people and it was terrible. We put up ads on bass forums and stuff and got some very strange people applying. Lots of middle-aged rockers. And nobody was suitable at all. And Bas [Hankins – percussionist] had this friend who was a session player. He was out for a beer with him and just by chance he said ‘I want to join a band I’m sick of being a bass for hire with all these famous acts but never feeling like I’m part of it’. So Bas said ‘Funnily enough we’re looking for a bass player,’ and now he’s working for half the money that he was working for before.

I did want to ask that… is a difference between a member of the band and a session musician – that they get paid less?

Exactly, it’s exactly that: you can join the band and you now get paid less. You know how hard it is to make a living from music these days. Session players generally play with people who’ve got record companies and loads of money to spend. We haven’t got that so we’d always have to get friends to play and it would always be mates rates because we can’t afford to pay big fees. Jon he heard the album and he thought it had potential so he was willing to take a punt. And so far he seems to be enjoying it.

Are you planning to do a lot of touring this time round?

With it being a six-piece it’s kind of expensive to tour. We tried to book a big tour of Europe recently and we ended up cutting it to five dates. We’re just going to do a really brief tour of the UK and Europe now. And then do another tour later in the year and lots of festivals. Basically this year we want to tour as much as possible.

Would you ever think of going solo or playing with a couple of you?

We’ve been asked to do that quite a few times by the record label and I really try and avoid it. When I”m writing I have ideas for melody lines that go in between vocals and stuff and when they’re not there it feels really boring to me. I hate doing it, I really hate doing it.

We actually started out when we started the new incarnation of the Leisure Society it was just me and Christian doing Simon and Garfunkel-esque acoustic, so that’s how it all kind of started and gained momentum.

I don’t mind doing it occasionally, the two of us went to Berlin to do some promo and it was kind of fun to do the odd song, but to do a full gig is different. I just really like the instrumentation and the textures that it brings. If we did more than a few songs like that I would get bored so I wouldn’t expect anyone else to be interested!