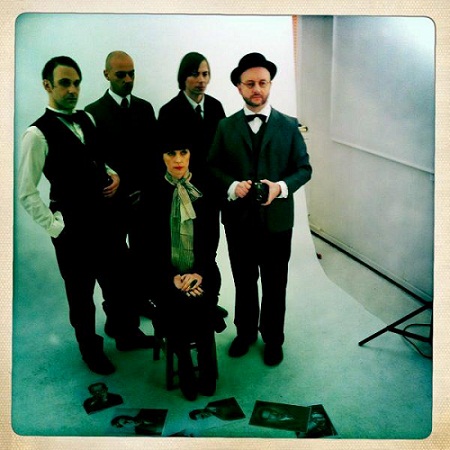 For a band that have been going since 1996, released 11 albums and scored the soundtrack for a film, you might be forgiven for never having heard of Piano Magic. Initially conceived as a purely studio project, an initial disinclination to perform live and level of experimentation often way beyond their time means that they’ve consistently – some might say intentionally – avoided mass popularity. Add to that some seriously dark nihilism, periods of near-unlistenable electronica and a refusal to stick to genre that would make Brian Eno weep, and you have something so complex as to seem impenetrable.

Spend just a little time in the subterranean world of Piano Magic, however, and you find an endlessly multi-layered onion, each release an infinitely challenging musical world in its own right. One could suggest numerous influences and genres – Nick Cave, Joy Division, Underground Railroad, cold-wave, synth-wave, post-rock – and not really come close to describing their sound. The antithesis of throwaway pop, they require dedicated listening and an open mind. If any band deserved an investment of your time, this is it.

You’ve maintained a very low profile throughout the 11 years you’ve been recording. Why is this?

Not entirely through choice and not entirely. When we started, we fitted neatly into a vaguely “post-rock” bracket which was fairly ‘hip’ at the time, but as our records became less and less bracketable, in the UK at least, the media tended to ignore us. In retrospect, this was the best thing that could’ve happened because a) we had very little interest in being a ‘fashionable’ group and b) we wanted to travel. We quickly made connections on the continent and for a long time, we happily toured Spain, Italy, Germany, etc, and through that found our way into their magazines, on to their radio stations and on occasion on to their TV programmes. You go where you’re wanted.

For those who haven’t come in contact with your music, how would you describe it?

Lyrical, romantic, dynamic, emotive. We don’t make disposable music. We make music that reaches for the heart and hopefully, music that will continue to touch people long after we’re gone. I have no doubt that this isn’t our time. Our time will come long after we’ve dismantled.

How have you evolved over time?

We started as a bedroom recording project that never intended to make records or play live, but that all changed the moment someone offered us a gig and someone else offered us a record deal. In some respects, I was quite happy making strange little electronic experiments on a dusty Tascam 4-track but once you get the bug – once you see your record in a store or hear it on the radio or someone says, “Come to Turkey and play on a beach,” you can’t really turn back. This band has been a vehicle for so many amazing experiences. That’s really why we’ve continued for so long. Certainly not for fame or money.

Your new record, Life Has Not Finished With Me Yet, is very, very dark – is this a reflection of how the band members view life? If not, where does this bleak nihilism come from?

That’s really my fault. I lead the band down these dark alleyways because the ink in my pen is black. I can’t write jolly ditties but that’s not to say I’m a depressed person. I do have a sense of humour and I go out and I have ‘fun’ – albeit my version of ‘fun.’ It’s just that, whenever I sit down at my writing table, I go into therapy. Piano Magic is one big, 15 year-long therapy session. Am I a nihilist? Yes. Do I think we’re all just filling time? Yes. Do I think there’s any ‘meaning’ to all this? No. But it doesn’t drag me down.

Who and what are you influenced by?

Mostly a lot of music from our formative years, undoubtedly. Four of us grew up through the 80’s, which I still consider to be a really exciting time for music. Beneath all the pop and the glitz there was so much sonic innovation and so many great songs that’ve stood the toil of time and so many interesting characters and scenes and turns and twists and fusions. I was buying all kinds of wires and gadgets in Tandy when I was 11 – anything I could use to record noises with. Not much has changed. Except Tandy is now Maplins.

With your previous aversion to playing live and refusal to stick to any one formula, you’re like the anti-band – almost determined to turn people off you. Was this intentional?

Hmmm, we’ve honestly never tried to push people away. In the first 5 years of our existence, certainly we made some fairly abstract electronica which even now, for me, borders on unlistenable, but this was all in the interests of experimentation, of keeping things fresh. A few years ago, we made an album called Disaffected, which, to a lot of people, seemed to herald a ‘breakthrough’. But we stepped back from the edge of popularity because, historically, once you become popular, you generally fight to maintain popularity and your true intention, the reason why you started making music in the first place, withers and dies away.

I think our unplotted course has left a lot of disenchantment in its wake but we’ve also picked up new fans to replace the old ones along the way. Because of this, our record sales and our concert attendances have pretty much evened out. We sell the same amount of records as we did 10 years ago.

How do you feel about playing live now?

Generally we only play concerts we feel will be special, at least to us. Whether it’s a church in Florence or a gallery in Crystal Palace, our intention is always heart. We exist to touch hearts and minds. We only fail when everyone in the room walks away nonplussed or untouched.

Your line-up has been in constant flux – does the current configuration feel like the best one and one you might stick with?

This current configuration is the most comfortable and thus, it’s lasted the longest. We have that rare chemistry between us which ignites when we plug our instruments in. It’s also there socially, when we’re just sitting around a table with a few beers, talking. I’ve worked with hundreds of bands and if I’m really honest, I’ve rarely met any other band with the same chemistry we have, on and off stage. Most of them seem to pack up their connections when they walk offstage as if they’d rather be friends with anyone but the people in the band. We’re not like that.

On your website it says you’ve never quite ‘infiltrated the heart of the British music press’. Are you too experimental for a slightly conventional British taste?

We’re too old, unfashionable, resistant. Of course, a nice review in Mojo is heart-warming but once you live for that, you’re fucked. The opinion of one person just doesn’t matter because for every one person who doesn’t connect with your music, there’s one that does…..or so you’d hope.

What direction will the band take next (and how do you decide what this will be after each new recording)?

I’ve been trying to lug us back to the home-recorded, more electronic stuff lately, but we all have a fair amount of resistance to packing the guitars away for any period of time. Two of the band are not particularly electronic, it must be said, so trying to guide them into Maplins is a lost cause. I was schooled in Kraftwerk, Cabaret Voltaire, early electro-pop, cold-wave but also in much more lyrical stuff like The Smiths and The Go-Betweens so I’ve always had this itch to marry the two elements. That will continue, be it with Piano Magic or otherwise.

Do you have ‘fun’ making these brooding, dark-night-of-the-soul records, or is it something more complex?

A sort of 70’s Hammer Horror fun perhaps. “Feast your eyes, gloat your soul on my accursed ugliness!”