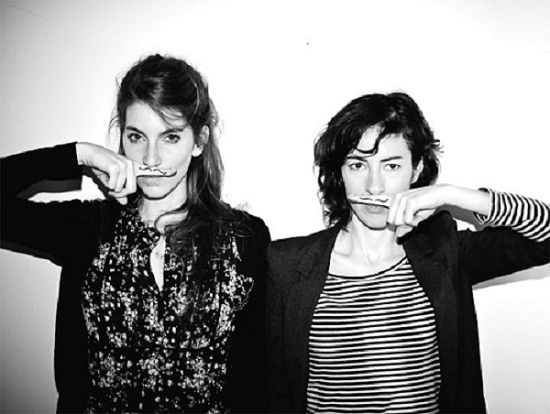 Contrary to what their name might suggest, BOY are Valeska Steiner and Sonja Glass, whose hand-clapping pop hit ‘Little Numbers’ attracted almost 5 million views on YouTube. Falling somewhere between Feist and the sweeter side of Regina Spector, BOY write sparkly folk-pop with some unexpected edges. In person, Steiner and Glass are as easily likeable as their music – despite having just stepped off a flight from Paris they were sweet, charming and accommodating, their near-perfect English punctuated with giggles and some very endearing ‘Ja’s.  Travel weariness notwithstanding, we got the low down on this promising new duo.

For those who don’t know BOY, how would you describe your music?

Valeska: I would say there is some ‘singer/songwriter’ to it because we both really care about telling stories and the songs work even if they are in small arrangements. But with the album it was important to us to think bigger and to really have a firm band arrangement and not just use the classical instruments of a band. Also we really wanted to have special sound and to keep it transparent and light.

Who are you influenced by?

V: I don’t think we could name our favourite bands and then you would know what our music sounds like…

Sonja: I think, for me, when I write I am in my room at home and I need quiet. Sometimes  a bass or guitar line inspires me…

So what styles of music do you listen to?

V: It varies a lot. I mean, we love hip hop for example, which has nothing to do with our music! And then of course we have some favourite bands in common like Phoenix, Bon Iver, and I really like Susan Vega as a song writer.

You’re from two different countries – how did you meet?

S: We met in Hamburg and we both were doing a music workshop and ja, there we met.

Did you instantly have a musical connection?

S: Ja, I heard her sing and I really loved her voice…we started talking and playing older songs by her and said, “Oh ja, it’s nice ja?”

V: Ja! [they both laugh] I think it’s really important that it works on both levels – that you like each other and then that you really feel you have the same vision and that you care about the same things in music, and that was really the case.

You write and sing in English – why this choice?

V: For me I never really asked myself the question. Singing in Swiss German, which is another language from High German, is something that you do in school and it always belongs to that kind of singing, for me. I’ve always listened to English music so when I stared singing I covered English songs and it’s the language I feel most comfortable in when I sing.

S: Also, Switzerland is a quite small country and for me it would be strange if she would sing Swiss German because no-one in Germany would understand it.

V: It would have been very limiting. 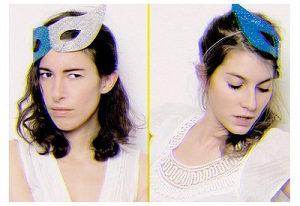 You’ve been touring a lot recently – what’ve the highlights been?

V: There’ve been so many, it’s really hard just to name a few…

S: Touring by itself is a highlight, because so many people came and were singing along and we felt that the music touched them, so that’s a gift.

V: …and then of course there’s special venues we’ll always remember – last year we opened for Brian Ferry in Paris at the Olympia which is a very nice and old theatre with a long and very impressive history of people who have played there, like the Beatles or Jeff Buckley.

S: Of course people were not there for us, they were there for Brian Ferry! But it was very special…

S: The showers! [both laugh] Mostly they are very dirty and there’s one shower and you have to share it with so many people and you always have to wait.

The unglamorous side of being a musician! Have you been surprised by the reaction to your music? You’ve got almost 5 million hits on YouTube for ‘Little Numbers’…

V: Yes definitely, we would have never expected it.

S: It’s a bit strange and I think that people just liked the video also and the mood.

S: Yeah it’s like summer and it’s a positive song –

V: We just had so much fun making it!

Are most of your songs overwhelmingly positive or do you have darker influences as well?

V: And maybe the songs have both emotions…I can just speak for the lyrics, but the main influence was moving from Zurich where I had grown up to a new city. That was always mixed feelings because you miss home but you are also very curious and excited being at the new place and that is already a little bit of a twist. Maybe that’s why people can hear it both ways.

Did you settle in Hamburg because of the band?

V: That was definitely one reason… I really remembered Hamburg as a city I liked and a place where there was lot going on musically. I had the feeling that, knowing Sonja, I would have someone there I could work with…

It took about two and half years to make your debut album. How would you feel if your record company said, “Right you’ve got 6 – 8 months to make the next album?”  Would that be difficult?

S: Ja! We are in the lucky position that we have a record label n Germany where the owner of the label is an artist themselves, so they understand how musicians work, so I think nobody would ask us to do a record like that.

V: I think record labels are not making themselves a favour by forcing their bands to be productive as quickly as possible. For us I’m sure we would just make a worse record…at the moment it’s really hard because we don’t even have time for writing news songs because we’re touring so much. So it’s really important to us to have a certain time in mind that we can just have for writing.

One thing we particularly liked about the album are the quirky moments where you veer a little bit on the experimental side. Is this something you can see yourselves exploring a bit more?

S: I think we will see when we do it, because we didn’t think so much when we were writing the first one, we just saw what came out and where it was going…

V: We didn’t have a concept or anything.

What’s your favourite song on the album and why?

V: It’s really hard to say, it always changes, and I don’t listen to the album so much now! I really enjoy playing ‘Oh Boy’ live, and the story of ‘Drive Darling’ is very important to me.

S: Ja, it changes but one of my favourites is ‘Railway’ – I just like it! But I like all the songs.

How does your song-writing process work?

V: It’s very equal but quite divided and we work very separately in the beginning. Sonja makes instrumentals at her place and then sends them to me via email. It took us some time to find out how we write the best because it really didn’t work when we were sitting in one room. I think we both need a bit of space for what we do. Then I have the instrumental and I think of a story and the melody and send it back to her…and then at some point when we feel like this is an idea, we work on it together with our producer.

In the UK we’re a bit insular when it comes to music – which German bands would you recommend?

V: There is a great band called Super Sieben Hundert [Super700]  – they just released an album which is really great.

What are you most excited about?

V: Well this week is really exciting for us, because we were in Paris and we played our first proper show there and it was full and really nice and our album was released on the same day in the UK. Sometimes we can’t really catch up on all the excitement!

S: And we were in Holland as well, and in the next few months we will see so many different countries I’ve never been to  – we are supporting Katie Melua, so it’s a really exciting time.