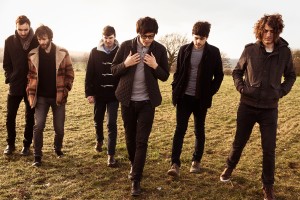 They’ve not been around five minutes but already Story Books are selling out venues in London’s music-conscious East End and writing songs that belie their infancy as a band. FFS caught up with lead singer Kristofer Harris to get the lowdown, and discover why he’d spend a billion pounds on a better toilet.

We are Story Books, there are six of us. We grew up in the weedy patches in the Garden of England. At the core of much of our music is a simple folk song, generally written with the intention of carving out space for expansive and experimental elements. Sometimes the noise is very loud.

Tell us a bit about the new single.

‘All Those Arrows’. It is our first single, and one which we recorded and put together ourselves. For us, it sparked a change in direction from what we had initially set off to do – which was something probably a bit too stripped back to keep us interested for long enough to have made it worthwhile.

We’ve not got many to select from. Some of us have played more gigs and traveled far wider as musicians making up parts of others’ bands. Relatively speaking, Story Books is just a baby. A slightly road-worn, impatient and grumpy baby.

There are only ever minor complaints, the kind where you’d have to question your intentions if you really took them seriously. At this stage, I would only complain about the things that get in the way of us, or some of our talented friends, simply being musicians.

Getting away from home, partially escaping the containment of small town life and routine and getting to be a ‘legitimate’ waster every once in a while. Normal things/dark things: sitting on a train, feeling unsettled, being plagued by regret, needing new shoes etc.

We run a little studio here in Kent. We try to help people out as much as we possibly can, small labels, kid bands or our friends that are like us, DIY-ing it; it’s tricky to balance alongside ‘making a living’ or trying to keep the studio at the very least self-sufficient. It would certainly be nice to free up those financial commitments so that we could make records for all our pals, willy nilly. Maybe first we’d move it to a place with a water heater and better toilet facilities.

We have a song called ‘Peregrine’, which was written at a time after I had just returned from a month of travelling the US with Laura Marling and Smoke Fairies and found myself at a loose end in many respects. On an entirely personal level, it’s a healthy reminder that I am able to continue working away at the things which interest me the most at a period when I may have felt particularly despondent and disconnected from their importance.

To stay sane. To write and put out a full-length record that we can be openly proud of.

James Canty’s ‘Shark In The Shallows’. You must hear it.

Rob and I played on the Smoke Fairies’ album ‘Blood Speaks’, which comes out in May and we are very excited about. I feel we’re both very lucky to have been involved in a process which resulted in a record that sounds so accomplished.