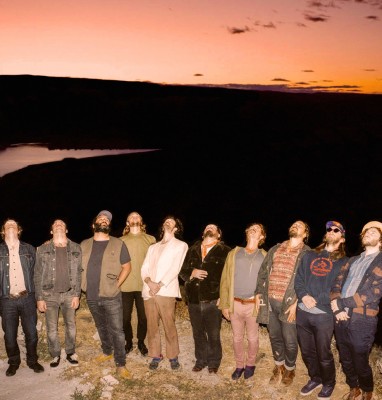 I was hesitant about a 10-piece folk band in small venue due to the potential of instruments muddling and sounding chaotic, but found myself incredibly impressed with Edward Sharpe and the Magnetic Zeros’ performance 2016 at the Sinclair in Cambridge, MA.

It’s worth mentioning that on this tour, the band decided to have an open mic as their opening act, so members of the audience had the opportunity to show their chops.

After the last performer of the open mic finished, the audience was eagerly awaiting the band to take the stage. Eventually, they humbly came on, announced they were going to be playing mostly (if not exclusively) all songs from their new album PersonA, picked up their instruments and started playing.

They opened with ‘Somewhere’, a perfect opener that set the tone for the rest of their concert. This new album is on the psychedelic side of folk with the ethereal harmonies, loose instruments, and dynamics. ‘Somewhere’ kicked the show off with the right amount of energy, without giving it all away.

Another highlight of the show was their song ‘Free Stuff’, the lead off single from the new record. The song was inspired by the lack of originality Alex Ebert, lead singer and songwriter of the band, heard on the radio. At the concert, he talked about how too many bands are substituting lyrics for “heys” and “hos”.

‘Hot Coals’, the first track off of PersonA, was an absolute jam. The psychedelic vocals and effects and the sparse, but mathematical hits of the instruments was very interesting. This song was definitely more on the psychedelic spectrum than some of the other tunes they played at the show.

‘No Love Like Yours’ was a very fun song and had a lot of interesting changes. The entire crowd was clearly very into this song and was collectively bobbing and dancing. The refrain and chorus of this song is addicting to listen to.

‘Lullaby’, the second to last song, was my personal favorite of the show. The song is a hilarious, tongue and cheek lullaby dedicated and inspired by his daughter. “If it only but I fear it will be my fault/If ever my dear you act adult.” The background vocals were the entire band singing in unison and layered beneath a beautiful piano line, all backing Alex Ebert.

The band really brought it at the Sinclair. They were very tight, which is difficult when there are 10 members, therefore 10 different instruments and components, of the band. Alex Ebert was personable and hilarious, constantly interacting with the crowd, explaining the inspiration and meaning of some of the songs, and making those moments in between songs when the band is switching instruments or tuning go by quickly due to his witty banter. That was my first, and definitely not last, time seeing the band.