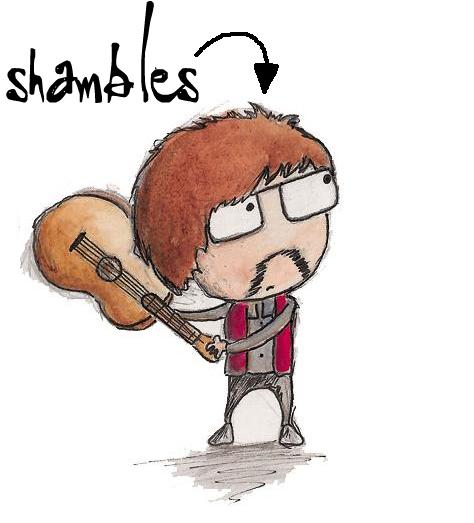 Damien Girling “Let’s begin with the most immediately interesting aspect of the music of Shambles Miller, his voice. It’s lovely and expressive Scottish twang draws one in, much the like the singers of Frightened Rabbit and Twilight Sad and sounds both tough and sweet. The music though shares little with his countrymen. It’s nice folk music that recalls the likes of Ray LaMontage, Iron & Wine, Johny Cash & early Bob Dylan. It recalls these artists through its use of simple but effective chord changes which are designed to link effectively with the vocal patterns being weaved and accentuate the lyrics, which are both cutting and humorous. This is certainly something that would fit with the music reviewed on For Folk’s Sake.”

Ian Parker “Listening to Shambles Miller’s EP is a confusing experience. On opener ‘Pssst!’ he appears to be gunning for a punk-folk effect a la Jeff Lewis, but comes off sounding amateurish. But just when you’re about to give up on the whole thing, ‘Robots’ comes on and reveals a more polished, sweeter sound. While you’re getting your head around that transition, ‘Nothing Unfolding’ aims for the epic (missing, albeit narrowly) and the whole thing is rounded off by the melancholic ‘My Best Friend Is An Outsider’. You get to the end, and you’re not really any clearer on what Miller wants to be. The second and fourth tracks show promise, but he’s plenty of work left to do, starting with figuring out what kind of artist he wants to be.”

Michael Fern “Shambles begins his EP by living up to his name with the endearingly off-kilter and entertaining ‘Pssst!’. Playful lyrics ranging from superstition to swine flu combine with a simple harmonica to produce a solid opener, but the remainder of the album suffers from a more serious tone. ’Nothing Unfolding’ in particular doesn’t quite capture the imagination. Shambles’ vocals – and his songs themselves – lose their distinctiveness when he drops his whimsical approach for the darker one which seems to come more naturally to him.”

Hear Shambles Miller for yourself at MySpace.com/iamshambles.