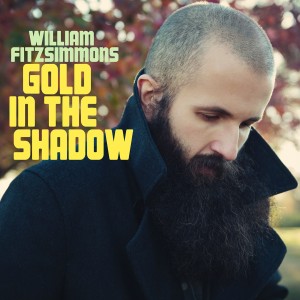 Before listening to the album, I’d heard word that Gold in the Shadow is the most optimistic of William Fitzsimmons’ releases so far. Everything is relative of course, and bearing that in mind I’m inclined to agree. The title immediately suggested to me that this album would have a more positive spin than previous works, but that the ‘shadow’ still existed and warranted a mention.

The album feels reflective throughout, and Fitzsimmons is known to write music based on his own life experience. As part of that experience involves working as a mental health therapist, introspection isn’t a shocking trait but what is truly wonderful is the honesty that his music carries with it. Nothing about it feels contrived or over produced, in fact some lyrics are so full of confusion he could be talking to himself. In ‘Fade And Then Return’ he sings “Should I know you? A stranger though you seem, you feel like home”. This sincerity carries throughout the album. His voice is whisperingly gentle, reassuring alongside often intense lyrics. Listening feels like getting a hug from a friend when things aren’t going quite right.

There’s a sense throughout the album that recovery is possible, and the last songs on the album are particularly romantic and subdued. In ‘Wounded Head’ Fitzsimmons asks that we “feel the string once broken mended and slowly tied” but in the very next track ‘Tied To Me’, he sings “I get the sense that we’re all chasing after the same simple thing that I don’t understand.” Perhaps it’s the confusion that appeals, is it reassuring that we’re all clueless?

The album really is a beauty. Slip in to an armchair or lay in the spring sunshine and get reflective for an hour or so. If it’s worked for William…