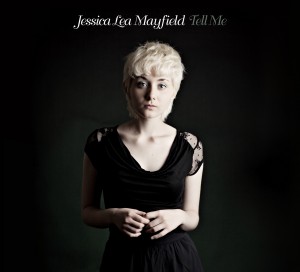 Back in 2009, the 20-year-old Jessica Lea Mayfield released her debut album With Blasphemy So Heartfelt. Dan Auerbach – Ohio’s own Jack White (minimalist blues-rock band – check, endless side-projects – check, taste for production – check) had championed her cause and took control of the dials, helping to produce an edgy album of folk-blues. It did okay, but even with the big-name backing, Mayfield remained largely obscure.

And so it was that her name could credibly appear a couple of months back in The Guardian’s “New Band of the Day” feature, quickly followed by a tip from Rolling Stone as a breakthrough artist for 2011. Something special must be brewing, we thought, for sophomore release Tell Me. Auerbach was back, and maybe Mayfield was ready to take on the world.

The problem is, if anything, Tell Me sounds like a side-step, rather than a move forward. There is ambition, sure, as Mayfield broadens her range, producing funky moments like the intro to the title track, as well as the bright, breezy pop of ‘Blue Skies Again’ – a track that would sound more at home on a She & Him album than it does here, potentially earning her plenty of radio time in the coming months.

But the new range leaves the album feeling unfocused, less than the sum of its parts. There are plenty of good songs here, but much of the second half is content to plod along, feeling disconnected to what has gone before. It’s by no means a bad record, Mayfield clearly has too much talent for that, but nor is it the one the pre-release hype seemed to promise. Still only 21, Mayfield has all the potential in the world. We just need to wait a little longer to hear it fully realised.