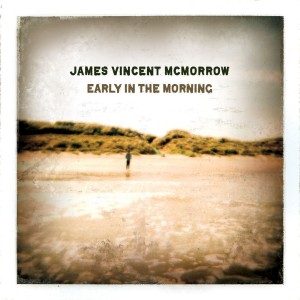 Be warned: the rise of smokey-timbre’d troubadour James Vincent McMorrow will be littered with Bon Iver comparisons. Certainly the breathy vocals, haunting harmonies, and woodsy themes in McMorrow’s debut invite such characterizations, but Early In The Morning is no brooding For Emma, Forever Ago. The Irish artist (who, incidentally, also recorded his album in an isolated cabin) adds a soulful edge and pop sensibility to his folk; the result is closer to James Morrison than Justin Vernon.

Like Morrison and even Mumford & Sons, McMorrow clearly has a talent for crafting accessible music. Early In The Morning is assertive, littered with catchy hooks and anthemic swells. The album never seems to ignore its audience; from whispered ballads (‘Down the Burning Ropes’) to banjo-driven romps (‘Sparrow and the Wolf’), McMorrow is confidently expressive. He conjures a fervent
and relatable passion, though occasionally mistaking cliché for sentimental simplicity.

The album’s strengths are beautifully embodied in opening track and first single ‘If I Had a Boat’: it is thoughtfully constructed, sincere, and showcases the emotional power of McMorrow’s rich voice. Early In The Morning presents to the world a promising new artist developing his own identity—Bon Iver comparisons be damned.