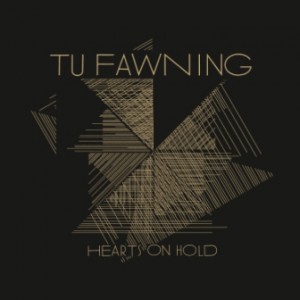 The minute Tu Fawning’s debut album Hearts on Hold opens with I Know You Know, one thought will hit you. Portishead. The debt to Geoff Barrow and co. is glaring in this subtle but infectious tune. But don’t get sucked in right away, this is only one song, and Tu Fawning are not a Portishead rip off.

What you learn quickly about Tu Fawning is that they’ve set their ambitions on conquering all styles. It’s perhaps unsurprising for a group composed entirely of multi-instrumentalists, pulled together by Joe Haege and Corrina Repp. Folks, swing, rock, jazz and more raise their heads along the way, but somehow the etheral, smokey atmospherics keep everything together as one. Just about.

There are moments of brilliance here, but sadly most of them are confined to the first half. After the slow stomp of I Know You Know comes the pulsating The Felt Sense, and the enchanting Diamonds, but this album proves to be frontloaded, and the pace drops, almost suddenly and dramatically, at the midway point.

Mouths of Young is three and a half minutes of dirge, which, critically placed at the start of the second half, seems to signal the end of the good stuff. And so it proves, with Hand Grenade and Multiply failing to give the album back its mojo, and you’re hit by the sense that all of the exuberant experiments of the first half have run their course.

Don’t get me wrong. The second half isn’t awful, far from it. But it has nothing of the kaliedoscope of ideas of what came before, and pales in comparison. Its pace is slow, it’s theme is dirge, and it almost sounds like a different album. Some of the life and colour returns for the closer Just Too Much, but by then interest has waned. They say a good album has you reaching to press repeat when it gets to the end, but in this case you only want to get back to the start so you can forget the end.

← Autumn Red
WIN! Tickets to The Head & the Heart, Mariners Children and The Fancy Dress Party in London (24/01) →