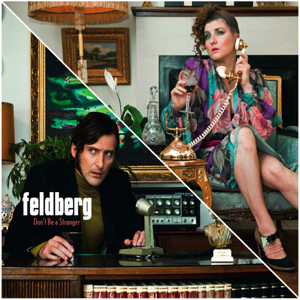 Iceland has been spoiling us with some glorious music in recent years. From the wonderfully gorgeous folk of Ólöf Arnalds to the breathtaking Sigur Ros (not to forget Jonsi‘s brilliant solo album earlier this year) and the unimitable output of Bjork. The latest wonder to come from that part of world is Feldberg. They are Einar Tönsberg and Rósa Birgitta Ísfeld. They started out by meeting up once a week to jam out songs and, after some instant success in their native homeland, have released their debut album internationally. Don’t Be A Stranger is straightforward indie pop and very well-conceived indie pop at that.

It should be pointed out that what Feldberg are doing isn’t really a new spin on the genre. The carefree attitude of ‘Running Around’ has more than the whiff of a certain ‘1234’ by Canadian songstress Feist. ‘Sleepy’ is dreamy and gorgeous for the first minute or so before it changes direction entirely and ups the tempo. It’s this toing and froing of dynamics that makes the track a clear standout, although it is rivalled by the title track: a masterclass in good songwriting.
As an album, it couldn’t be more to-the-point. It clocks in at a very efficient thirty-six minutes and neither feels too long or too short. Over its running time it also maintains a certain amount of charm and playfulness. It’s so easy to dismiss some of the lyrics on here as quite basic and quite simplistic but it works so well that it’s not even worth contemplating.

If you’re a fan of duos along the lines of She & Him then this will serve you well. It’s a light and bouncy collection of songs that does what it sets out to do: make you smile and get the odd melody or two trapped in your head, which will then force you to hum it out loud to the surprise of people around you. You really will not care though. What Feldberg also show is that there seems to be no stopping the countless number of superb artists coming from Iceland.